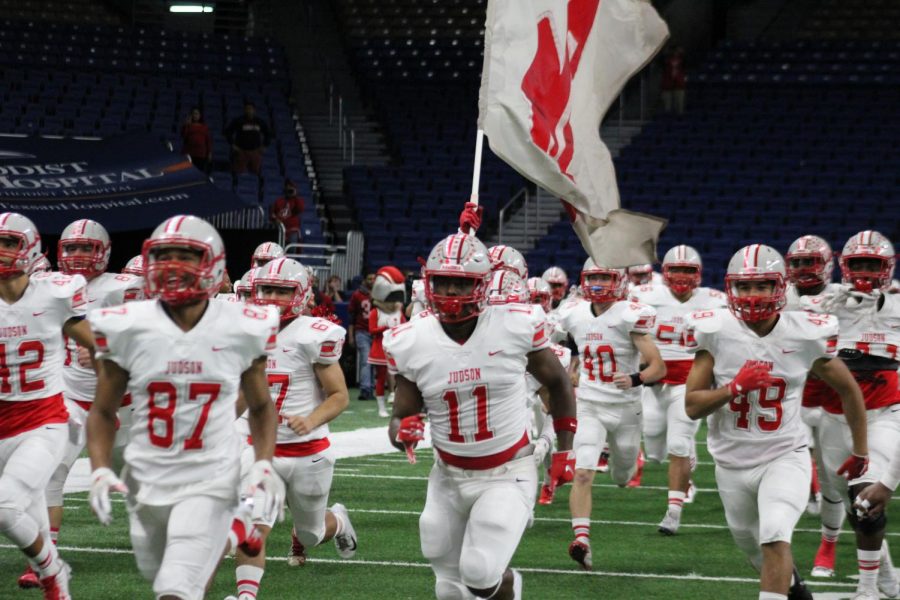 The Rockets run onto the field during their game against Reagan. This year, The Fuel is projecting the team to go far under the new leadership of Coach Rodney Williams.

By: Raven Gatson and Alberto Torres

With the season around the corner, many people are doubting the Judson Rockets, following the change in the head coaching position, lack of experience on defense, and the back to back playoff losses to Lake Travis.

Yet, with a much younger team carrying the torch into this upcoming season, do the Judson Rockets have what it takes?

The Rockets head into this season ranked 12th in the state in 6A and third in Region 4 with Austin Lake Travis and Austin Westlake at first and second, according to Dave Campbell’s Texas Football Magazine.

Judson will take on the Brandeis Broncos this Friday, August 23, 2019, for a scrimmage game at Farris Stadium. It will be the first look at what the Rockets will look like this season. Yet, Brandeis is no slouch, as they return 15 starters including junior dual-threat quarterback Jordan Battles who will test the Rocket’s defense. Whatever happens in that scrimmage should say a lot about what the season holds for both squads.

The Rockets open up the regular season at Challenger Columbia Stadium in the greater Houston area as they take on the Clear Springs Chargers. The Rockets were able to take care of business 46-28 at home last year and both teams went on to win their respective districts. Clear Springs is always a team-to-watch in the Houston area and will be that again with seven returning starters on offense including quarterback Garrett Rooker who passed for nearly 2,000 yards a year ago. Both Judson and Clear Springs will have an inexperienced defense, so we can assume this will be a high-scoring game from the get-go. Score prediction: Rockets 42, Clear Springs 34.

Hosting the Hammerbowl this year, the Rockets take on the 5A Division 1 state semi-finalists the Wagner Thunderbirds. Wagner returns five starters on offense and four starters on the defensive. Prominent forces such as fullback L.J. Butler and wide receiver Joshua Cobbs on offense will look to put on a showcase against the defense. Defensive end Demarcus Hendricks will look to breach the offensive line to get to Mike Chandler. However, Judson rides a seven-game winning streak against the Thunderbirds. Score prediction: Rockets 49, Thunderbirds 42 (possible overtime).

The Rockets then take on the Harlingen Cardinals at home. Last year, due to inclement weather, this game was unable to be played. but they will hope to finally fulfill their meeting this season. Because Harlingen isn’t known for being able to compete with non-Valley teams, this game is less about the prominence of Harlingen and more about the underclassmen for the Rockets gaining on-field experience before the schedule becomes tougher. Score Prediction: Rockets 35, Harlingen 3.

The Rockets go on the road to Lehnhoff Stadium to take on the 25th ranked Steele Knights. With hometown prominence, this game determines less on playoff implications and is more a determinant for the district rankings. The Knights return dual-threat junior quarterback Wyatt Beagle who had over 2,100 yards as a sophomore last year and wide receiver Daniel Jackson. The Knights have always been sound on defense throughout the years and expect them to give the Rocket offense a really hard time. Score Prediction: Rockets 38, Steele 35 (field goal wins it).

Coming off a bye week, New Braunfels will look to shake up the Rocket’s possible undefeated record, as they possess a home-field advantage. Returning five players on both offenses including quarterback Peyton Driggers and five starters on defense, they are placed under Clemens. This should again be an easy win for the Rockets, as they become more comfortable on offense. Score Prediction: Rockets 35, New Braunfels 14.

After New Braunfels, the Rockets take on the always tough Smithson Valley Rangers. The Rockets shut out the Rangers last year in the rain 28-0 for the first time in the Ranger’s history but they look to reverse that this season. The Rangers return 16 starters which is the most in school history according to Dave Campbell’s Texas Football Magazine. However, they will have inexperience at the quarterback position after losing Levi Williams to graduation.

To close out the regular season, the Rockets travel back to Lehnhoff Stadium to face a long-time rival, the Clemens Buffaloes. This rivalry dates back to the early 1960s. The Buffaloes return 15 starters from a 6-5 team a year ago. Clemens could give the Rockets a hard time before playoffs as the experience on defense will challenge the Rockets offense. Score Prediction: Rockets 31, Clemens 7.

The overall record at the end of the regular season: 10-0.

What is the team’s overall goal going into this season?: “No doubt one of our goals is making it to the playoffs. A lot of people are doubting us this year because we lost a senior stacked team from last year. It’s about trying to make a statement to people that we are the same team.”

What is your personal goal?: “To commit to a college and make all-district/region.”

What is the team’s overall goal going into this season?: “Goal is to win games and become better as players on and off the field. We need to also blend as a team since we have a lot of newcomers.”

What is your personal goal?: “To make over 1000 yards rushing and simply score. I also want to make my teammates better and improve on every aspect of the game.”

What is your personal goal?: “To make around at least seven interceptions this season.”

What is the team’s overall goal going into this season?: “The goal is to go to state and that is a continuous goal every season.”

How is it working with Coach Williams?: “It has been really exciting and a great experience.”

What is your personal goal?: “To lead the state in tackles.”

What is your personal goal?: “Being the best I can be and getting looked at by colleges.”

How is it working with Coach Williams?:“ He has been here for my last four years and he has continued to be a great coach.”

What is your personal goal?: “Get more division one offers and become an all-state athlete.”

What is the overall goal of the offense?: “Put up as many points as possible and be the best offensive in the district.”

What is your personal goal?: “Make my team better as an individual.”

What is the overall goal of the defense?: “We should be top tier against a lot of competition.  ‘

What is your personal goal?: “A personal goal for me is to make All-District and take the team to state and lead the o-line.”

How is it working with Coach Williams?: “He’s really putting in a lot of, not different, but interesting plays.”

What is the team’s overall goal going into this season?: “Just try to get as far as we can and work hard to the top, go back to the playoffs.”

What is your personal goal?: “I’m trying to reach number one [as a running back], and be the best I can be.”

What is the team’s overall goal going into this season?: “Become a family like we are right now, and be the best team in San Antonio and the state of Texas.”

What is your personal goal?: “To have fun and be one of the best receivers in the state of Texas and the nation and be the best that there was and leave a name for myself.”