A sit down with Mayor Suarez 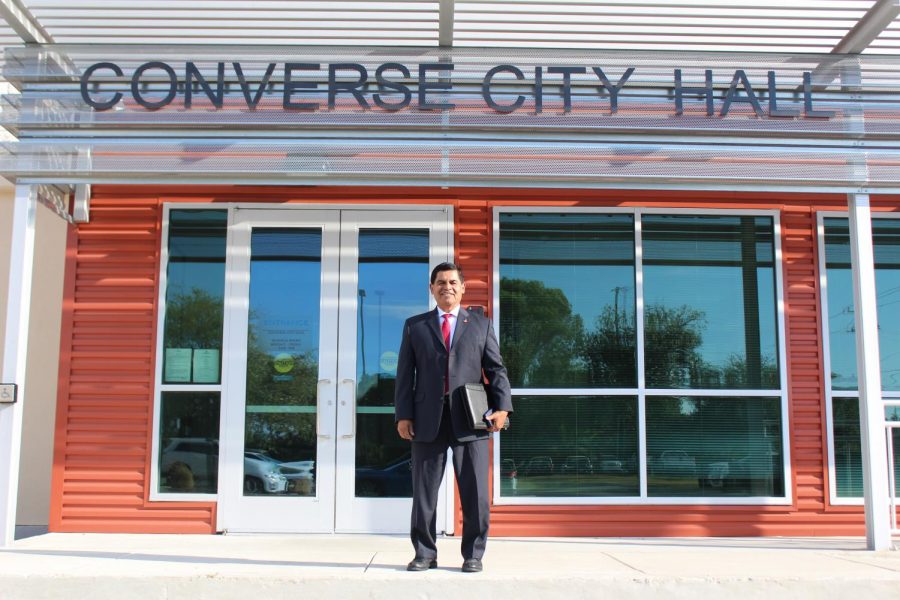 Mayor Suarez poses in front of the Converse City Hall. He is starting his 13th year in office.

Some people are just born to be great leaders, to step up and have a following.

Mayor Al Suarez may just be one of those people, picked from the masses, chosen by the people, to help this small town in Texas and improve it.

From the beginning, Suarez had support for being a voice in the community.

“My neighborhood volunteered me for a [commuity project] and I became a (volunteer) council member. I felt that there was a lot that could be done. I did not go into the committee to be mayor. I came here to work and help out,” Suarez said.

Previous to his days in office, Suarez completed 21 years in the military. He has an Associate’s, Bachelor’s, and Masters’s degrees in education. He completed 18 years as an air traffic controller and also currently works for the state courts. Occasionally, he will go out to the elementary schools and meet with the students and teachers.

“I’m big on education. You can never learn enough. I go out to the schools because I want [the kids] to know that they can do what I do. I read to the kids and I go to every event I can,” Suarez said.

When Suarez came into office, he created a chance for the people to tell him what was going in town, the things he may not immediately see. For example, Mayor’s Call happens every month on the second and fourth Saturdays. Members of the community have the opportunity to walk in and simply talk to the mayor about things they believe are important.

Having such an open relationship with the school district and the community itself has an impact. And sometimes that impact is shown through the littlest things. Or the littlest people.

“I was at Walmart and a little girl and her mother were waving at me. I went to say hello and she says, ‘My daughter recognized you and wanted to say hi.’ I asked her what grade she was in and she said the first grade. That was a great feeling, interacting with the young ones,” Suarez said.

On many of his campaign posters, the words “People’s Mayor” are written under Suarez’s picture. The story of how that title came to be is not one built from office, but from home.

“[At] about 1:30 in the morning, my phone rings and I hear a citizen yelling and screaming, saying the water tower lines busted behind our house and it’s creating a flood. I immediately called public works to get the water shut off. But I asked him if he thought I was going to answer and he told me no. ‘I didn’t think you would but I didn’t have anyone else to call.’ And he said to me, ‘You’re all for the people, you’re the people’s mayor,’” Suarez said.

Having been in office for 13 years, Suarez has accomplished many projects, including widening roads and building a new animal shelter, but that doesn’t mean he’s finished. He plans on converting the old city hall building to a community center.

“For me, these are very proud times because, in 13 years, we’ve done a lot of work and seen a lot of results. We have other cities copying what we do because it works. And we’re going to turn [the old city hall] into a senior community center, where we can bring people together to have events,” Suarez said.

Elections will be held in November. But until then, Suarez will be working continuously on projects around Converse, as well as his re-election campaign.