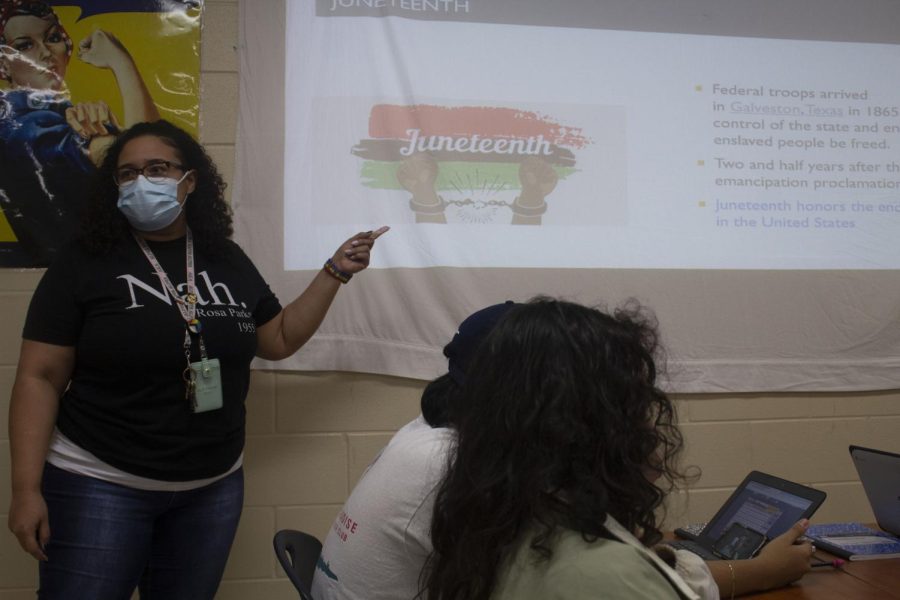 Black History Month was nationally recognized in 1976 by the 38th President, Gerald Ford. Before this, there was “Negro History Week”. Started by Carter Woodson in 1926, this week was a way to commemorate and highlight historical black events, people and accomplishments.

Despite being named Black History Month, some feel that students should be exposed to important Black Americans and events throughout their time as a student. With the introduction of bills aiming to abolish the teaching of Critical Race Theory in colleges, the topic has gotten heated. African American Studies teacher Jennifer Lozano-Dozier wants us to use this moment as a reason to educate ourselves on these controversial topics and on Black history.

“I think the misinformation that’s given, especially with these bills being passed, it’s fear mongering,” African American Studies teacher Jennifer Lozano- Dozier said. “You have some people who are fearful of making their kids uncomfortable about learning the truth, and there are others who fear retaliation from the kids learning this history. However, regardless, everyone needs to learn about the past, so we don’t repeat it,” she said.

Historically, there have been obstacles preventing students from learning the full extent of American history. However, no one can stand in the way of discussion, and Lozano-Dozier feels that discussion is the key to progression.

“A lot has happened in our past that we don’t know of. Having grandparents and great-grandparents who were silenced for many years has caused a historical blockage with passing down stories from their generation to ours. I feel that if we spoke about these things more, it would help the Black community grow,” Dozier said.

Ignorance is bliss. When people are misinformed, or not informed at all, especially on black subjects, it causes people to assume and form their own conclusions or common misconceptions. According to one African American Studies student, the fix is to be proactive.

“Ignorance negatively affects the black community because it causes people to not fully understand the systematic problems of not only back then, but today as well. Educating ourselves prevents us from completely ignoring an issue, or saying something offensive,” junior Madison Gosinski said.

There are certain cases, where people simply don’t have the tools to learn about Black history. Years ago, Dozier was in this position herself. Because of this, she makes it her mission to accurately illuminate the significance of Black history for those students who just simply don’t know.

“I teach Black history because it’s something I’ve always been passionate about. I grew up with my Mexican-American side of the family, so I didn’t know a lot about my other heritage from my dad’s side,” Dozier said. “The older I got, the more I learned about his family and their stories, and it made me interested in history from the Black perspective,” she said.

Although the current students in the class have only been learning for a few weeks, they’re taking in new knowledge that may have never been revealed without the course.

“I’ve learned many things so far, like how America has risen through conflict such as slavery and segregation and where we’ve descended from,” junior Izaeah Hoyt said. “My opinion on Black history has grown stronger as I learn and understand how everything went down, and my favorite part about this class is I learn things I probably would never learn in a regular history class,” he said.

According to Lozano-Dozier, the course is a learning opportunity for everyone, whether you’re Black or not.

“Black history shouldn’t be taught just to black children. I think all children should learn about all history,” Lozano-Dozier said. “Having a diverse classroom has had a positive effect in education, and it truly makes me happy to see that different races and backgrounds want to learn about this subject… We need to show the world that you can’t grow if you stay comfortable and safe without learning about these topics,” she said.

For Lozano-Dozier, the class serves as a way for highschool students to take advantage of resources and learning opportunities that her generation didn’t have.

“My generation didn’t get to learn about these topics in highschool. We had to wait until later,” she said. “This course is like a brief introduction to what you would learn if you furthered with this in college. There is a vast amount of information that is taught in a brief time, and students don’t fully understand the impact they’re making by attending these classes,” Lozano-Dozier said.

Judson is one of few schools that offers an African American Studies course to high school students in Texas.

“I feel really privileged that I get to teach this class, because I know many other schools do not offer this course,” Lozano-Dozier said. “Besides what the state gives me to teach, I have creative control of what I want to teach and how long I want to teach it. It’s inspirational to see that we, as teachers in this district, are given the chance to teach multicultural, diverse classes such as these,” she said.

For teachers who aren’t given the opportunity to speak on Black subjects, she says that it is vital to work through those triumphs and do what you think is best as a teacher.

“Being passionate about Black history is sometimes a lonely soapbox that you’ll have to stand on to voice your opinions and concerns about teaching Black history,” Lozano-Dozier said. “I know there might be people losing their jobs, especially in states and cities that are trying to keep courses like this from being open, and on campus. I think it’s important to stand our ground and really push for diverse learning in the classroom. Even if they’re trying to silence you, find different avenues and other outlets to voice your opinion,” she said.

It is vital for everyone to have a good understanding of all history in order to get a good illustration of the past. The importance of learning Black history is slowly changing overtime. Lozano-Dozier wants students to take advantage of the opportunity of her African American Studies course. It is her hope that those students would then spread the knowledge that Black history is everyone’s history.

For one student currently in the course, African American Studies has been a great learning experience.

“I feel like a lot of this history should be known, and now that it was brought to me, I feel like I need to pass it on to others. There are more African American people who have impacted our lives than who we’ve been told, and I like the fact that not only am I learning, but I’m not learning alone,” senior Adaja McNeal said.

Mrs. Lozano-Dozier wants students to know that the African American Studies class is offered on course cards for next year and that course cards are due this Friday to counselors.