After clinching the district championship, Rockets look to go far in the playoffs 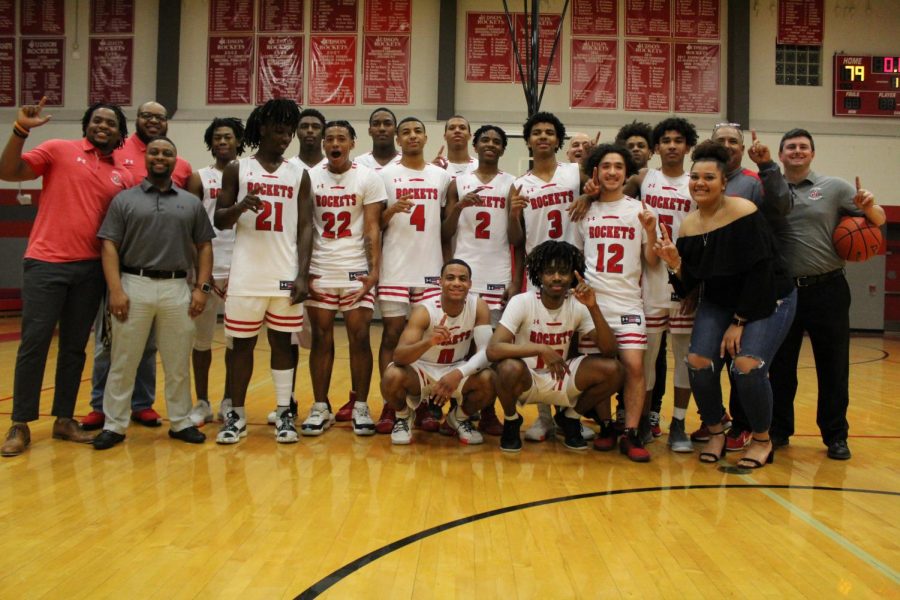 The boys basketball celebrates their last game of the regular season against Clemens. They will enter the playoffs on Tuesday, February 25, at Seguin High School against Buda Hays.

Some would say that last years’ 62-55 loss to Austin Bowie in the first round of the playoffs was a shock and a disappointment. The Rockets surely aren’t a team used to being one-and-done in the playoffs.

This year, the Judson Rockets boys basketball team finished the regular season 26-9. However, they earned District 26-6A Champions with a 14-0 record for the first time since the 2013-2014 season when the Rockets went all the way to the state championship game.

Just like the Lady Rockets, the boys didn’t have the best start to the season. They went 0-4 to start with losses against Wagner, Cypress-Fairbanks, Dickinson, and Pearland Dawson, all of which are also in the playoffs. The Rockets would then go 26-5, and after they got back some former football players such as senior Michael Chandler and junior Davion Wilson, the team started to fire on all cylinders.

Going into the playoffs, there isn’t a single stand out player on this team, as everyone can score and can contribute. The Chandler-Wilson duo has been phenomenal to end the season and seniors Kyonte Holder and Ambrose Johnson, along with junior Sean Tamez can shoot very well beyond the three-point line. Sophomore Anariss Brandon can also score when needed and senior Arthur Celestin adds incredible height to the team.

The Rockets have exceeded expectations, sweeping District 26-6A and fending off last year’s state semi-finalist, the Steele Knights, and beating both Smithson Valley and East Central by fair margins.

In order for the Rockets to have success in the playoffs, they need to start off fast and never look back. The slow starts against Clemens and Smithson Valley need to be avoided. Lurking ahead are teams like Roosevelt (27-7), O’Connor (23-8), state-ranked Austin Westlake (32-1), Warren (26-5), state-ranked Brandeis (28-3), and Johnson (29-7), which could all take advantage of poor starts in the big games.

Austin Westlake (32-1) has only lost one game the entire season and went undefeated in District 25-6A. If the Rockets get there, they would face this very dangerous Chaparrals squad in the third round who are looking to get back to the state tournament. Another state-ranked opponent would be the Brandeis Broncos (28-3) who went 16-2 in a tough District 28-6A but emerged as district champion. They are led by Tanner Brown and Kyle Schaefer, both with over 400 points on the season. The Westlake Chaparrals and the Brandeis Broncos are the favorites in Region 4, but the Judson Rockets lurk in the background.

The Rockets will take on the Buda Hays Rebels (21-10) in the first round of the playoffs tomorrow at Seguin High School on Tuesday, February 25, at 7:00, and look to avoid another first-round exit. But with the weapons on hand, it seems that this team is poised for something greater.