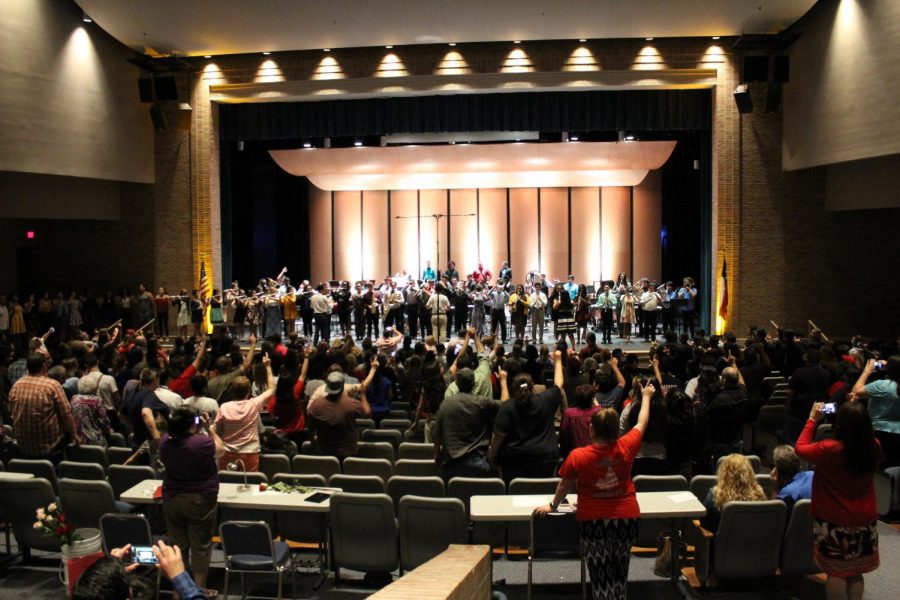 On Tuesday, April 24, the Judson Band had their spring concert. This was their last concert of the year, with final performances from students and awards.

Many were presented with special awards and scholarships, including senior Alex Gutierrez.

Gutierrez was the only Judson band member chosen for the All-State Band. At the concert, he received two awards and played a solo in Band One’s performance.

“It was really rewarding because I put in a lot of hard work,” Gutierrez said.

After the awards, each band performed two songs including the theme of Captain America and one of their songs from UIL, Brave Spirit.

Every year, towards the end of the concert, the directors reveal the next year’s marching show. It’s very anticipated from those who will come back and be able to perform it.

“I love the music chosen and it seems like it’s going to be very challenging, but will also be so much fun to learn and march. I can’t wait for us to start learning it,” sophomore Meghan Stuckey said.

Band One was the last to perform, playing three songs including Clarinet Concerto No. 1 and the Avengers theme.

The drum major ceremony was exciting to watch. Those who were the drum majors this year passed the whistle and advice to those who will take up the position next year. The 2018-2019 drum majors are Lonnie Buck, Tejas Fruean, Gustavo Lopez, and the junior drum major is Carlos Cortes.

“It’s exhilarating and an honor to be a drum major, let alone as a sophomore,” Buck said.

To end the night, all the seniors lined up onstage to perform the alma mater and fight song. It was a perfect way of saying goodbye to all the years they put into band and all the fun they had together.