Boys basketball advances in the playoffs 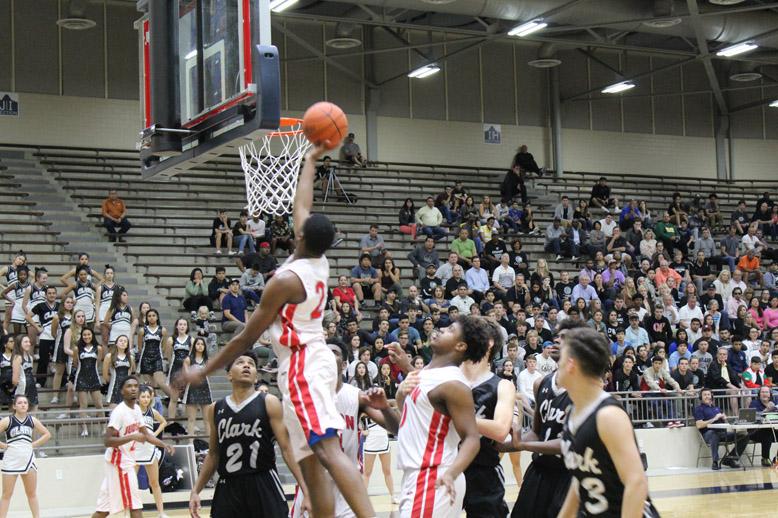 The Rockets entered the District 6A playoffs against the Clark Cougars at the Alamo Convocation Center. Head coach Victor Lopez and the Rockets are excited for this year’s playoffs.

“It’s exciting,” Lopez said. “It’s where you plan on working for all year long. Expectations are high at the end of the year; only four teams [from the division] make it and I think we have a good chance.”

Going into the game, watching tape is a major role, besides the physical preparation, of getting ready for a playoff game. This is what coach Lopez decided is key to winning this game, based off Clark’s film.

“They have a really good point guard,” Lopez said. “We think we’re going to do some little things to stop their offensive sets. They have a post player, number 43, that shoots threes a lot, and we want to make sure that doesn’t happen too much.”

In the first quarter, Kyle Fey took over quickly with a couple dives into the paint for lay-ups and an assists to Shelby Adams along the baseline for a lay-up under the basket. Ray’shawn Dotson took his turn at Clark, blocking a shot as Adams was able to drive for a fastbreak lay-up off the turnover. Finally, backing down in the paint made a hook shot to finish a 14-4 run. Clark would end the quarter with two straight threes by Antonio De La Trigg and a buzzer beater by Reyes Johnatan. Judson was up, 18-13.

In the second quarter, Quinton Crawford set the tone with another three pointer. Adams would leave a mark on the offensive and defensive side with a three pointer and a steal right after. The quarter was quite a struggle for both teams with Judson only scored ten points and Clark only six.

De La Trigg revived his team with a pump-fake, making his man jump, then strapped on a pull-up jumper. Next, he went to the foul line, making two of two, and responding with a three pointer to cut the Rockets lead to eight; score Judson up 43-35.

To avoid a Clark run, Adams sparked the energy of the home crowd with a steal and the two-handed jam for the dunk at the end of the fastbreak. Lastly, Adams closed out the third quarter with a buzzer-beater from near the halfcourt line.

The Rockets expanded their lead in the fourth quarter. Demarvin Leal came off the bench to close out the game; he started his run making one free throw. Then, he muscled his man up defensively in the post, forced his man to turnover the ball to Adams as he passed it to Doctson on another fastbreak for an easy lay-up. Next, Leal passed the ball from the left wing to find Doctson open in the middle of the paint for a lay-up. Then, he finished the streak with a put-back lay-up and backing down in the post for another high percentage lay-up.

Leal took over and capitalized for his bench and finished the game successfully for his team. This doesn’t come as a surprise to Lopez and his team as players step up out of nowhere all of the time.

“We have a lot of good player. Some teams only play six to seven guys. We go down on a normal game playing different guys. We’re really deep. You never know who’s going to have a good game. The guy in the second group could be having a better game than the guy in the first. We can play the guy having the best game until the end,” Lopez said.

The Rockets will go on to the area round of the playoffs at Dripping Springs High School against the (26-6) Westlake Chaparrals Friday, February 24.