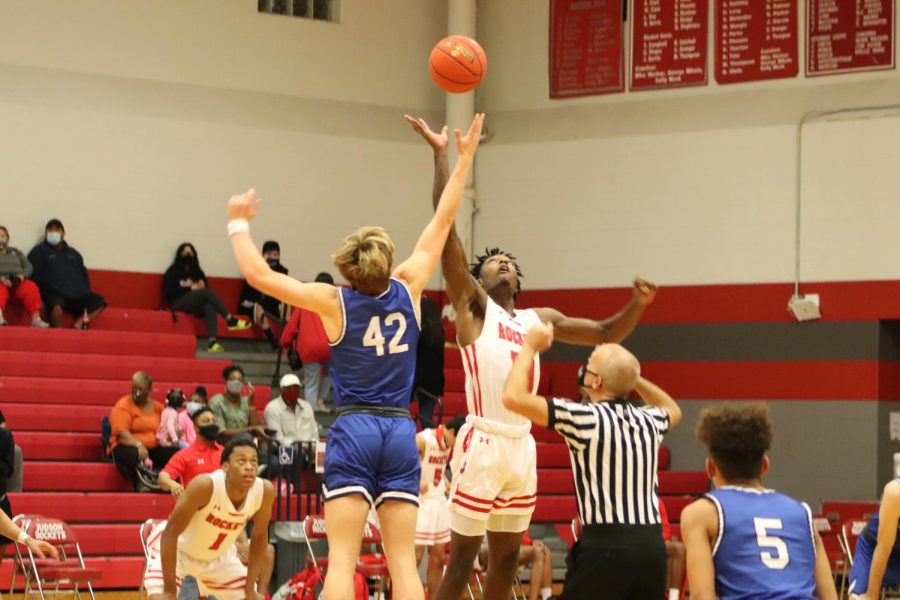 Boys basketball tips off with New Braunfels with senior Davion Wilson going for the jump ball. The Rockets ended up being the Unicorns, 70-59.

On Friday, January 22, the Judson Rockets (14-2) faced against the New Braunfels Unicorns (16-3) in their annual district match up.

Wilson started the second quarter with back to back shots. The Rockets kept their defense tight until the Unicorns managed to push through scoring their first basket of the second quarter. Both teams went back and forth, scoring consistently. With only three minutes left, the Rockets and Unicorns were both tied 24-24 until junior Mason Wallace scored two three-point shots, holding the score 30-25, Rockets with 1:20 seconds left. Senior Anariss Brandon was fouled while scouring a half-court buzzer-beater, which led to some confusion on the court before both teams retreated to the locker room with Judson up, 33-27.

The third quarter started quickly with the Unicorns scoring the first basket of the third. The Rockets then followed with a three-pointer by Tamez. Shortly after, Wilson scored a basket followed by a point from a free throw line. After a few more scored points from both teams, the Rockets lead 44-35. A critical block from sophomore Donovan Gomez led to an easy lay-up with an assist from Wallace. After an intense minute of back to back defense, the third quarter ended with the Rockets still in the lead 51-42.

After many mental mistakes by the Rockets in the fourth, the Unicorns managed to slightly catch up. Shortly after, both the Rockets and Unicorns went into an intense battle of scoring back and forth. Both teams kept their defense tight. However, the Rockets put their heart on the court and pushed through. Brandon showed out by scoring consistently to help lead the Rockets to victory, 70-59.