Calling out stereotypes and inequalities in female sports 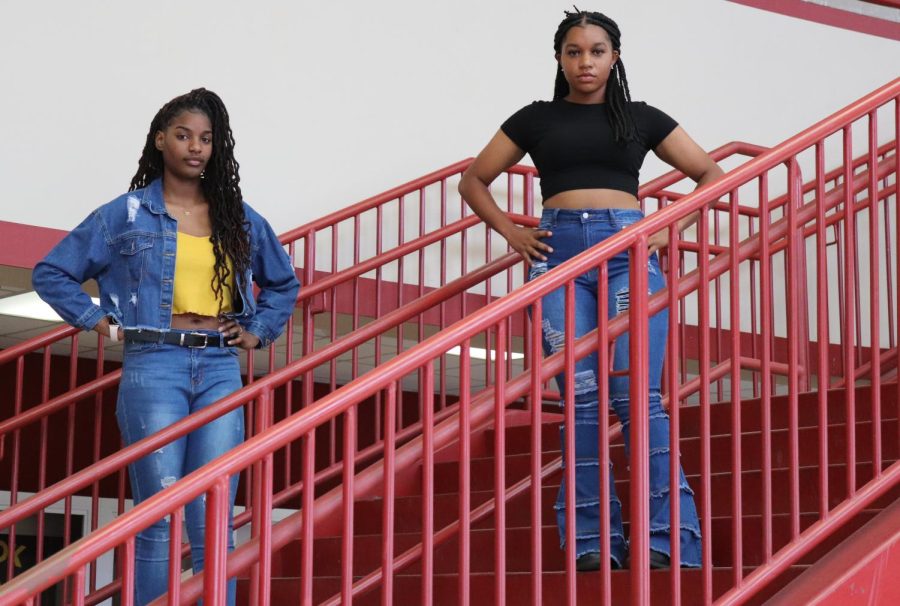 Senior Amira Mabry and junior Queenandra Dunn pose for a photograph in the P Wing stairwell.

“Women’s sports are not as entertaining.”

“Women’s sports are not as aggressive.”

Ever heard those before? I have.

They are common phrases echoed throughout society, used to undermine female athletes and create a negative view of the women’s sports industry. As a female athlete myself, this is infuriating because this type of thinking is inaccurate. So, why do some in society think this way?

This type of thinking stems from stereotypes that were created generations before us. They suggest that women are inferior to men, specifically where athleticism is concerned. Harmful stereotypes like these have influenced the ideas and created the assumptions that people today hold about female athletes.

It is time to change the culture.

Current Judson PE, Volleyball and Basketball Coach Breanna Brock brings a unique perspective to this conversation. Having played in both high school and collegiate sports, as well as even playing abroad for multiple professional basketball teams across Europe, she has personally felt the effects of the harmful stereotypes many have toward female athletes. For Brock, she thinks people just have very different expectations for men’s versus women’s sports.

“I feel like the support is different because for some people, I can’t speak for everyone, they think mens sports is more exciting,” Coach Brock said. “As a player at one point and now as a coach, if I’m talking basketball, womens sports is more the fundamentals. Whereas in men’s sports, you get more of the flashy stuff which might be more appealing to the crowd’s eye,” she said.

As a writer, and with some perspective as a female athlete myself, I realize that I too have been ignorant on the topic. At one point in time, I had the mindset that men’s sports are more exciting than women’s sports. I had a biased opinion because men’s sports was all I had ever really watched. However, as I’ve now begun watching both men’s and women’s sporting events, I can see that both are exciting in different ways.

If more people would give women’s sports the chance it deserves, I feel they would also make this realization. Coach Brock agrees.

“Women’s sports is just as exciting as men’s sports, you just have to be open to watching it,” Coach Brock said. “The people that disagree haven’t watched enough sports. We practice just how they practice. We lift weights like they do. We’re putting in the same amount of work, if not more. It will open your mind when you come to women’s sports games, because we deal with many different things that men don’t deal with in our playing,” she said.

As a female athlete, it’s frustrating to be seen as less of a hard worker because of my gender. I, like most athletes, have made a commitment to my sport. We do whatever is needed to reach our goals, regardless of gender.

Other female athletes, including many here at Judson, have also felt the struggles of being thought of as lesser than.

“It makes me feel disrespected when I see people uplift male sports more than female sports because we’re putting in the same amount of work as them,” junior Queenandra Dunn said. “I think they treat us differently, not so much because of gender, but because they have a comparison chart between us [male and female athletes] and look at us as if we’re weaker,” she said.

In March 2022 the American car manufacturer Buick put the issue in the national spotlight with a series of commercials that sought to raise awareness about the lack of media coverage of female sporting events. They even started a hashtag, #SeeHerGreatness, to drive awareness.

The commercials begin with a female athlete’s historical feat that they claim viewers probably didn’t hear about because of the lack of media coverage. Buick then states that, “Over 40% of athletes are female, but they get less than 10% of media coverage.” The statistic is impactful and proves why Buick is dedicated to helping fix the inequity.

Coach Brock expanded on the idea of the media’s unequal coverage.

“Advertising for women’s sport is not the same,” Coach Brock said. “One example is the WNBA. A lot of times you don’t even know when their season is going on, or even when they are in playoffs, championship games, etc. For the NBA, it’s a totally different story. You hear about that all year: locations, times, All-Star Weekend… I feel like that has another thing to do with why the [womens] games are not as packed.”

This discrepancy between advertising and attendance of male and female sporting events may start at the K-12 level. Judson Volleyball and Softball Coach Andrew Fields sees this as a problem.

Although the audience shouldn’t affect a player’s performance, it does contribute to the atmosphere. A big crowd can lift up the players and cheer them on to success. Coach Brock has experienced this firsthand.

“Speaking from experience at the college and professional level, it is hard not having fans at games,” Coach Brock said, “because they truly are what makes an event what it is. They get the crowd going most of the time and the players feed off that energy, and that’s very evident, even in high school sports. It definitely makes a difference when they’re not there.”

“At our games, most of the time it’s just our parents, while at the boys’ games, they’ll have a packed gym no matter who they play,” Mabry said. “I didn’t notice until I went to a few boys’ basketball games and thought that we could never have this many people at our game.”

Maybri insists this unfair predicament does not affect her performance; however, it still hurts.

“Personally, it doesn’t affect me who’s in the crowd, because I feel like I play consistently no matter what,” Mabry said. “However, I do feel like during some games, you need your school cheering for you. For example, our big Wagner game, we needed lots of people supporting us, but we didn’t get that. I feel like we’re overlooked, and it’s been like this for a while,” she said.

After hearing Mabry’s thoughts, it made me ponder the fact that the boys’ Wagner game was even televised by on ABC’s local station, KSAT-TV on channel 12. Did our Lady Rockets get that same honor? Nah.

“Usually people are accustomed to supporting the male sports,” Wallace said. “However, recently, when the girls won a state championship, it opened a lot of people’s eyes and they became more interested. Things like that can open things up for other girls’ sports. It will motivate them to have a winning season and strive for championships. It makes a difference to have an interactive crowd. It keeps morale high.”

For Mason, it is clear that a change is necessary regarding how the public treats female sports.

“I believe the girls’ sports deserve the same opportunity to be seen because, technically speaking, they’ve had better seasons. Both genders have great athletic programs and deserve equal representation,” Wallace said.

Another trend is that people only go to certain games when it’s been a winning season. While this is understandable, I think that it’s vital to understand that support encourages success. As a player, when the game begins to get hard, and I run out of reasons to play for myself, I remember that the people in the audience came to watch a competitive game, and it would be inconsiderate to waste their time.

Be a part of the change. Support your local female athletes. You can start this week by supporting our Lady Raider Softball athletes this Thursday in home games against Smithson Valley. JV plays at 5:00 pm and Varsity at 7:00 pm.