The Fuel Online • May 29, 2018 • https://thefuelonline.com/choir-ends-the-year-with-spring-concert/ 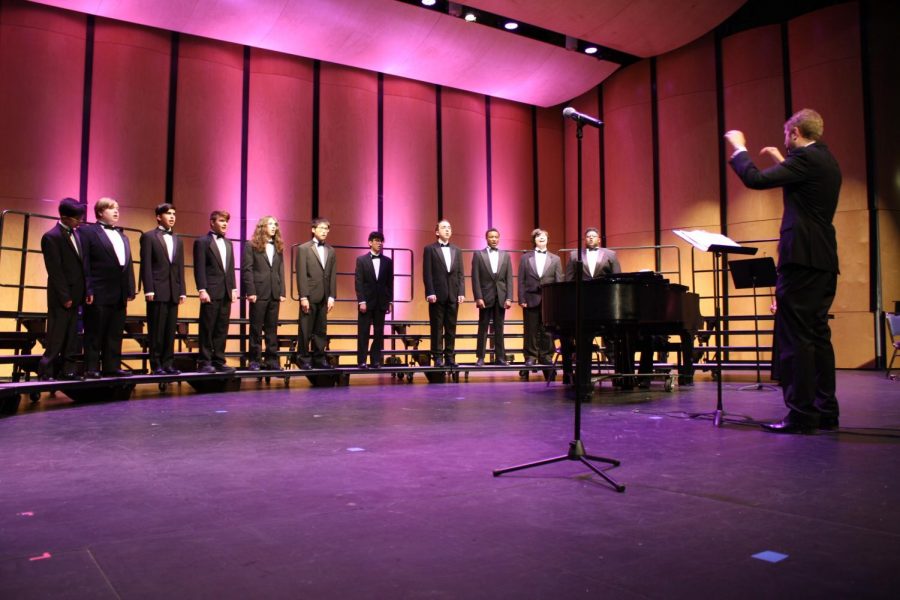 Mr. David Short conducts Brothers Ensemble during the choir concert. This is the last concert of the year for choir.

As the year winds down, the choir had their second to last performance on Tuesday, May 22.

The music theory one class opened by playing Remember Me. Cantate then took the stage to perform a melody of five songs.

“Our show is a salute to San Antonio and its culture, along with the others [enveloped] in it,” choir director Mr. David Short said.

After the last song, The Battle of Jericho, Nova came onstage and performed two songs including country song, Neon Moon by Ronnie Dunn. The talented singers added dance moves which made the audience laugh.

The Brothers Ensemble sang two songs on their own before being joined by the Chorale Men. Together, they performed A Tribute to the Armed Forces. All those with family members in the military were encouraged to stand for whatever branch they served in.

“I loved singing the Tribute because my family is in the Navy and I hope to go into the Marine Corp,” junior Ryan Piche said.

As the evening came to an end, Chorale came onstage and sang Water Night.

“Many have been [persistent] that they sing this song, so I finally caved,” Short said.

Scholarships were awarded to four lucky seniors in the choir this year. They were presented to seniors Michelle Stewart, Caymen Holiday, Serena Jackson, and Mackenzie Geiger.

“I will mostly put mine to college supplies,” Geiger said. “I believe that lots of people deserved it, but I think it really came down to who they thought needed it.”

As always, the choir sang their last song together, The Lord Bless You and Keep You. It was announced that the spirit captain for the next year would be junior Rashawn Hollis.

“It was a surprise to see it be him. Everyone thought he was leaving this year,” senior Ethan Castillo said.

The very last time to see this talented group of singers will be at the 2018 graduation ceremony. There, they will say their goodbyes to the full Cantate group and all the other seniors.