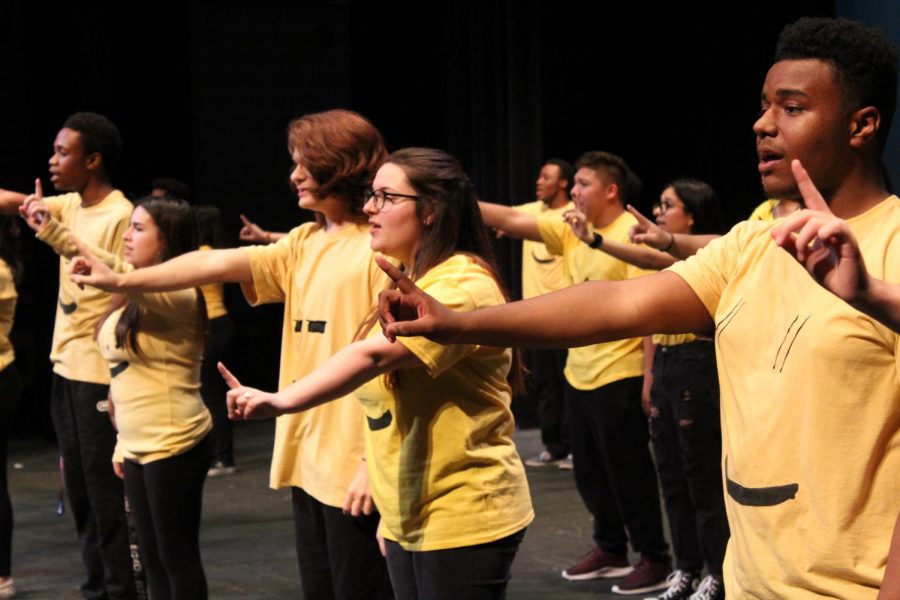 As the night came to an end, Chorale came together to Marshmellow’s “Happier,” before opening the auditorium to the rest of the choirs to dance to “High Hopes.”

The 38th annual Rocket Revue took place on Saturday, February 1, 2019. The theme for this year’s show was Judson FM, a radio-style studio setting with songs of every genre. Each choir performed together and several students performed solos between group acts.

The event also had a preview show during school the day before, to allow students to see a sneak peek of the concert.

“We wanted to give our student body a chance to see choir. I know a lot of times people can’t make it back up to school on a Saturday. It gave the student population a chance to see the great things happening in choir,” Choir Director David Short said.

Brova started out the night with Alessia Cara’s “The Middle.” The boys and girls danced together in a mirror style, one side reflecting the other. Senior Kaia Lopez made her debut on stage with “Take me to Church” by Hozier, followed by a duet cover of “Trampoline” starring senior Jasmine Jasso and junior Lijah Finley.

“It was a popular song on the radio. I hear it all the time and I wanted to do a duet with a friend of mine,” Finley said.

The next performance was Ladies A Cappella’s rendition of Britney Spears’ “Baby One More Time.” Sophomore Alyssa Frigo and senior Tristen Whatley held solos during the pop song, before passing the mic to sophomore Haley Bennet and senior Skye Swisher for their own respective solos, “Like a Stone” and “Unthinkable.”

“I did the song in middle school so I just thought I could bring it back and bring back old memories,” Swisher said.

With the room pitch dark, Chorale men took the stage dressed in black, with only small light effects to illuminate their presentation of “Some Nights.” Before Nova made their second appearance, sophomore Meredith Martinez beautifully performed “Vas a Llorar Por Mi,” followed by “Say You Won’t Let Go” sung by senior Lily Sandoval.

“We had some hardships but eventually we came through. We had a good time,” sophomore Jadin Blanchard said.

Blanchard went on to stun the audience during “Amarillo by Morning,” a wide range in genre from Chorale women’s performance of Heaven is a Place on Earth. Dressed to impress, junior Edwin Howell brought passion to Ne-yo’s “So Sick,” a sweet melody about heartbreak.

“Its a really popular song and I really felt deeply for it and I wanted to sing it for someone. I know that they were crying after,” Howell said.

Brothers’ Ensemble modeled the cheesy boy-band style during Bruno Mars’ “Treasure.” In pastel pinks, yellows and sunglasses, the boys paved the way for heart to shine onstage. Sophomore Kaya Beckman sang Love on the Brain, but in a soft and quiet tone, opposed to Rihanna’s wild original.

“It was kinda last minute, but I chose it because it fit my voice. I thought it was different from my usual style,” Beckman said

As the night came to an end, Chorale came together to Marshmellow’s “Happier,” before opening the auditorium to the rest of the choirs to dance to “High Hopes.” The enthusiasm radiated from each performer and created an atmosphere of joy and pride.

Now, the choir will start their UIL pieces and prepare for Solo and Ensemble.