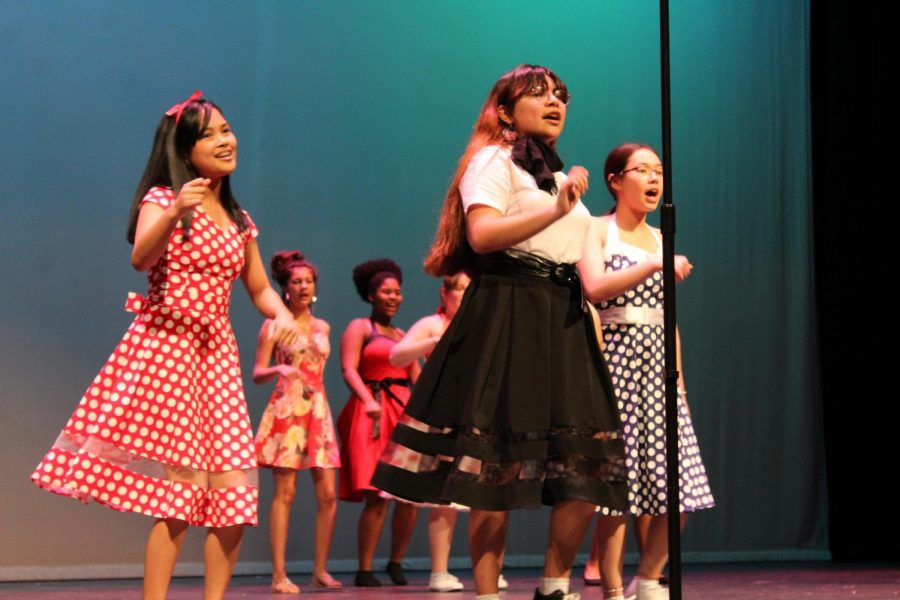 Ladies A Capella perform during the Judson choir’s annual Rocket Revue. The theme for this years show was "Broadway and Beyond."

On Saturday, February  9, the Judson Choir held their annual Rocket Revue. This year’s theme was “Broadway and Beyond,” consisting of songs from musicals and plays.

Cantate started the night with “Hernando’s Hideaway,” a tango style song from The Pajama Game. The singers wore black and red, dancing around the stage gracefully.

“I felt in the character, and it was cool. I couldn’t see the crowd but judging how they sounded after, I was pretty proud of myself,” Bennett said.

Concert women performed “We Go Together,” followed by “Colors of the Wind” from Pocahontas and “Dream a Little Dream” from its namesake, Dream a Little Dream. Juniors Kaia Lopez and Skye Swisher were the first of the night to sing as partners.

“Our song was planned once we knew the theme early in the fall. I learned the guitar of Daniel Caesar’s version of the song and we made it our own,” Lopez said.

The popular performance of Newsies was given by the brothers’ ensemble. Several of the boys were soloists in the song, including freshman Maurice Jackson, sophomore David Lene and junior Xavier Saucedo.

After a high-end performance by senior Heidi Neighbours of “Diamond are a Girl’s Best Friend,” the Chorale men broke out into the tune of “I’ve Got a Dream” from the Disney movie Tangled. The crowd broke out in laughter as they watched the pirates on stage sing of their deepest dreams. Rapunzel herself was played by sophomore Jacklyn Hopkins.

“It was exhilarating. She’s one of my favorite Disney princesses and I picked it because she’s glowing and I’m glowing,” Hopkins said.

Cantate made another appearance after intermission, playing the haunting tune, “The Ballad of Sweeny Todd.” The only light onstage came from the singers themselves, as they used flashlights to illuminate themselves against the darkness.

The next two songs were both very popular, even though they were produced years from each other. Freshman Edwin Howell and senior Samatha Olvera sang “Rewrite the Stars” from The Greatest Showman. Freshman Enrique Granados, senior Rashon Hollis, and freshman Jordan Mireles sang “Hakuna Matata” from The Lion King.

“I didn’t pick Hakuna Matata. I was chosen! My friend wanted me to be Simba and I said I would,” Hollis said.

Ladies A Capella sang “The New Girl in Town” from the musical Hairspray. They were followed by chorale women singing “Waitress,” the main song from the 2007 movie Waitress.

The last solos of the night were breathtaking, each musician giving their song their all. Sophomore Marissa Solis had chosen “Don’t Rain on my Parade,” a performance in which she gave justice too.

“It took a lot of practice, [learning] to control your breathing and knowing your range,” Solis said.

The show ended with the full chorale singing a mashup of songs from “Dear Evan Hansen” together in their final performance. After, every artist came back out into the auditorium and performed “The Greatest Show.” The song held an aura as they danced and sang, truly making it a great show.