Choir puts on first concert of the season 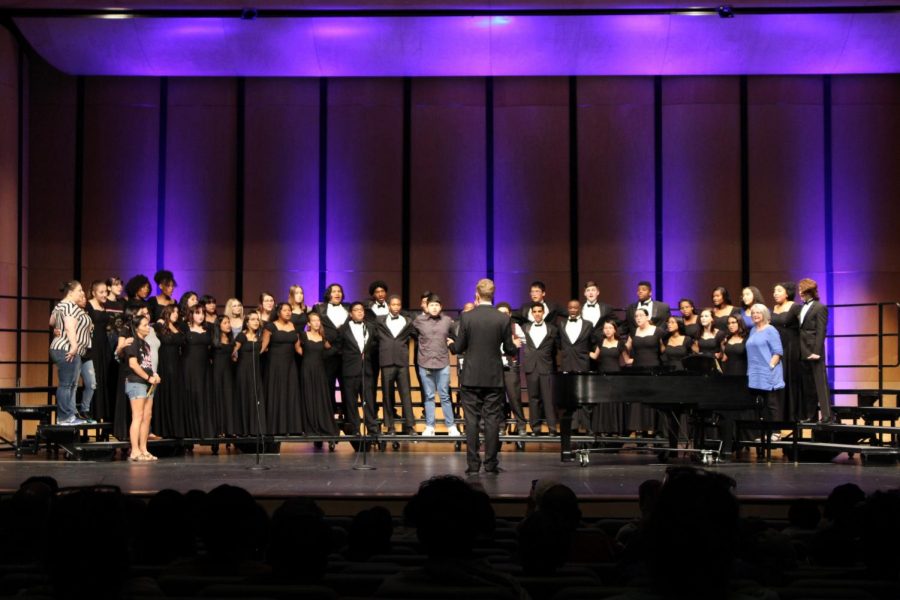 Current members and alumni come together at the end of the concert for a tradition, singing "The Lord Bless You and Keep You."

On October 1, 2019, the Judson Choir had its first performance of the year. The show consisted of eight groups, ranging from newbies to the choir program to seniors participating in their last year.

The first group to perform was Cantate, singing two songs for the night including Stand by Me and Superstition. The songs featured several soloists, including sophomore Haley Bennet, junior Marissa Solis, and senior Skye Swisher.

“It took time to practice it. It was the first concert so it’s not always going to be perfect. It took a while but [in a] few days, it should be easy,” Solis said.

Nova performed next, performing two songs of their own: Homeward Bound and Non Nobis Domine. Sophomore Kali Jacquot, freshmen Isabella Mora and Amiyah Nelson all held solos. After their performance, they were joined onstage by Brother’s Ensemble.

“It was really nerve-wracking [being up there in front of everybody]. My heartbeat [was] faster than it had ever been,” Mora said.

Forming “Brova,” Brothers’ and Nova sang in harmony to Sing for Joy. Then, it was time for the Brothers’ chance in the spotlight as they performed Nesta Rua. Freshman Jun Lopez, among others, was a soloist for Great Day, enlightening the music for the group.

“I think we blended really well and we knew our music which was a great help,” Lopez said.

Ladies A Cappella sang a trio of songs starting with a melodic story-telling of The Deaf Old Woman. Next came a soft melody, Shenandoah, and they concluded with the strong gospel, Praise His Holy Name. The two soloists, freshman Mykala Carlson-Richardson and sophomore Trenyce Cook sang with beauty and poise.

“It was so hard [to choose the soloists], all of them were so good. Mykala, she’s a freshman and new to choir, and I wanted to make sure that she had that experience,” assistant choir director Mrs. Tiffany Cristo said.

The last ensemble of the night was Chorale, who had five performances overall. The Chorale women started off with The Composition of a Kiss, including a reading of the poem the song is based on by senior Molly Tilton.

“It was a difficult song to understand and the poem had weird words, and doesn’t really match the music. Mr. Short wanted to make sure the audience knew what we were singing about, so he asked me to read it,” Tilton said.

“The text is that same from our UIL concert. It’s only the melody that we changed,” Short said.

The end of a Judson choir concert is a tradition. Chorale and any alumni present gather together and sing The Lord Bless You and Keep You. The excitement is started by the spirit captain, this year being senior Kaia Lopez, chanting the first line. Together, the group enjoys some pride only found in the choir program.

Overall, the concert was a success and the performers will go on to practice and prepare for their next moment in the spotlight.