Choir puts on their annual Jingle at the J 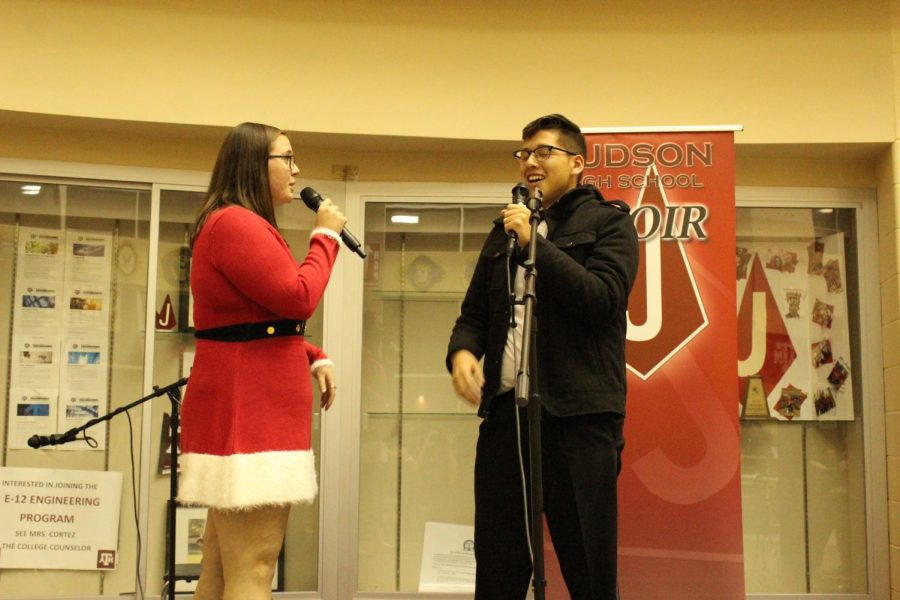 On Monday, December 18, the Judson Choir hosted Jingle at the J. Those who auditioned were able to perform on stage for their families and friends.

Jingle at the J is an annual tradition for the young artists at Judson. They get the chance to play a song of their choice with their friends and have fun with their families. Spirits were very high, with cheers and many applause for the singers after they finished.

Some of the choir were merely there to cheer their friends on and listen to the amazing carols. Others were helping with concessions.

“I didn’t have time to audition but I kind of wish I had. Listening to them was really fun, and they were all great.” junior Ryan Piche said.

Freshmen Evette Dears choose a classic tune, Hallelujah. Her performance was beautiful, poised, elegant, and harmonious. Looking around the room, everyone was moved by the song.

“This was my first time and I was really nervous, but I’m glad I did it. My mom helped a lot with encouragement,” Dears said.

Senior Randy Williams dedicated his song, Just to See You Smile, to his girlfriend. From that point on, his performance was sentimental and sweet.

“I was almost in tears as I sang my heart out for the one I love,” Williams said.

This year was the first year sophomore Kaia Lopez attended and performed at Jingle at the J. Having just moved here, she was excited to join in the festivities. Her song was one she had been practicing all year: Say You Won’t Let Go.

“My first time performing at Jingle at the J will be something I can remember forever,” Lopez said.

Senior Jamel Alexander sang Just the Two of Us by Bill Withers. The performance was very entertaining. Some of the Cantate choir even started singing along.

“[It was] a really cool experience and the first time I’ve done it. I think I did a really good job.” Alexander said.

The 2017 Jingle at the J was a complete hit. Everyone who went had an amazing time, and it was not just because of the free hot chocolate. Already done with TMEA Region auditions, the choir is already looking forward to next year’s performances.