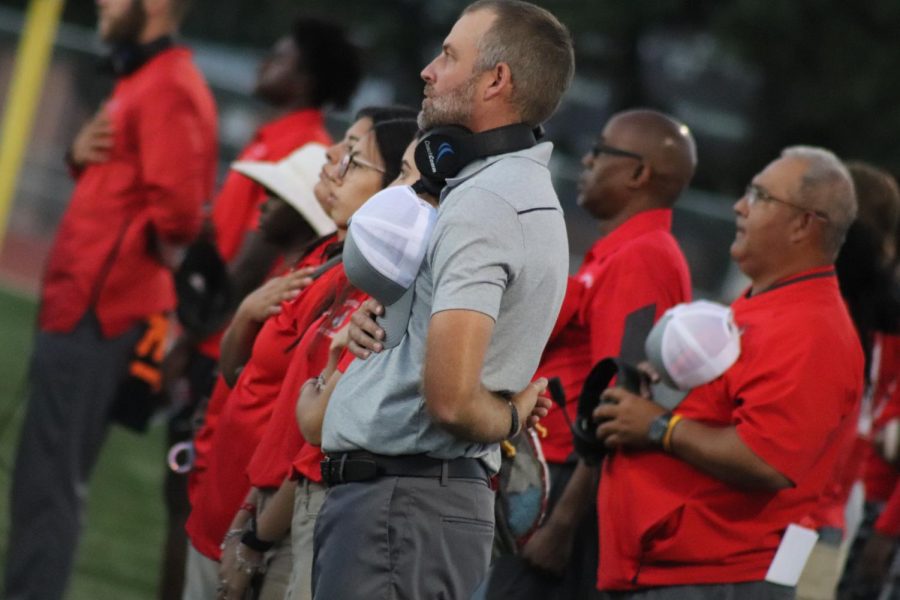 Coach Joel Calls holds his hat on his heart as the national anthem is played during the game against Smithson Valley. This was the first win of his career as head coach, beating Smithson Valley 33-32.

But interim head coach Joel Call is up for the challenge.

On October 17, 2021, Call was announced as the interim head coach for the team.

“When you’re at a place like Judson, a place that has a lot of pride, I know what the brand means. I know what Rocket Pride means. I was a part of it. That’s who I am as an individual,” Call said. “My objective is to make sure that all the young players here have all the same opportunities that I had from the program.”

He is a product of the football program and was inspired by one of the best coaches to ever coach the team.

Now that he’s taken over, it’s a dream come true.

“It’s an honor. They were difficult circumstances as I took over the program. It has been a lot of emotion, a lot of feelings. Coach Williams is a dear friend of mine. But to be able to lead this program the program I played for is a real dream come true,” Call said.

Although his first game was highlighted with the win against Smithson Valley, there’s more work ahead for Coach Call.

“Wins and losses are great, but I went into it preaching to my kids that wins and losses aren’t everything,” Call said. “We had three goals last week: to not make no excuses, to celebrate as a team, and to hustle everywhere on and off the field. So, I told my boys… if you do those things the wins will roll in.”

One of the big changes is to lead the program the way he was taught.

“I want to continue to lead the program in the way that I was taught – building better men first is the development of character because in the end, football is not going to be around for all of my players. We can’t play football for all our lives, but being productive members of society, being good husbands, those things will all be there with the development of individuals,” Call said.

For Coach, the entire experience is a calling.

“I love my job. I love my wife. I have a great coach’s wife. I don’t feel like this is a job. I feel like this is a calling and I love what I do so I’ve never felt like I’ve had to come to work. I come to build better men to be around the game of football which teaches better life skills,” Call said.

The win against Smithson Valley was a great first win for Call. He will be tested this Friday against Steele at Rutledge Stadium.