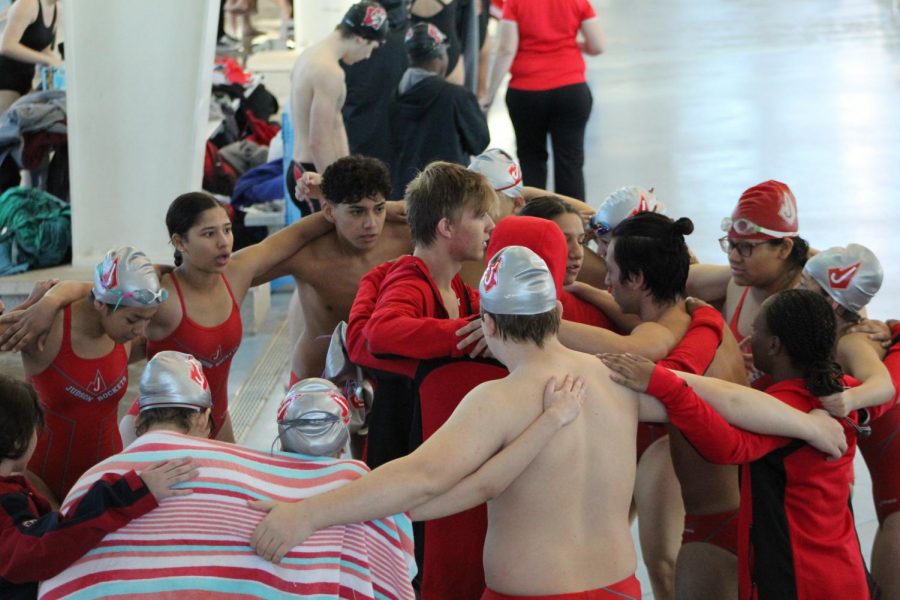 The swim team does their team chant after a meet at the Northside Natatorium. In the spring, Coach Murphy is looking to start up a water polo team.

Swim Coach Ryan Murphy is bringing water polo back to Judson High School and planned for tryouts to be this Saturday, December 7 at the Coronado Village pool in Universal City.

UIL recently decided to pilot water polo, so Murphy was quick to start the club at Judson.

“It’s going to be a UIL sport on a probation basis for the first year and if everything goes to plan, it will be a permanent UIL sport,” Murphy said.

Judson used to play water polo competitively. But due to changes of coaches throughout the years, it was forgotten.

“A couple of years ago, water polo was a really big thing,” co-captain Idalia Sandaval said. “Judson was a really big competitor in the tournaments, and I think it will bring back an old tradition and maybe even inspire new ones with a fresh team.”

An exciting thing about the new team is that anyone can join.

“The water polo team is open to anyone to try out, but it is intended to keep the Judson swim team to stay in shape.”

Water polo will help the team stay in shape, and bond them together with team goals.

“I think swimming competitively is very individual. We have relays that create the team atmosphere,” Sandaval said. “With water polo, you actually get to have that effort of working together rather than having more personal goals. This way, you can improve yourself and your team but still be in the water.”

Judson will start competing against schools across San Antonio, including the Northside district schools, during the spring.