Lead by Jeffry Van Slycke and Reymundo Andrade, the team is also hungry for another successful season 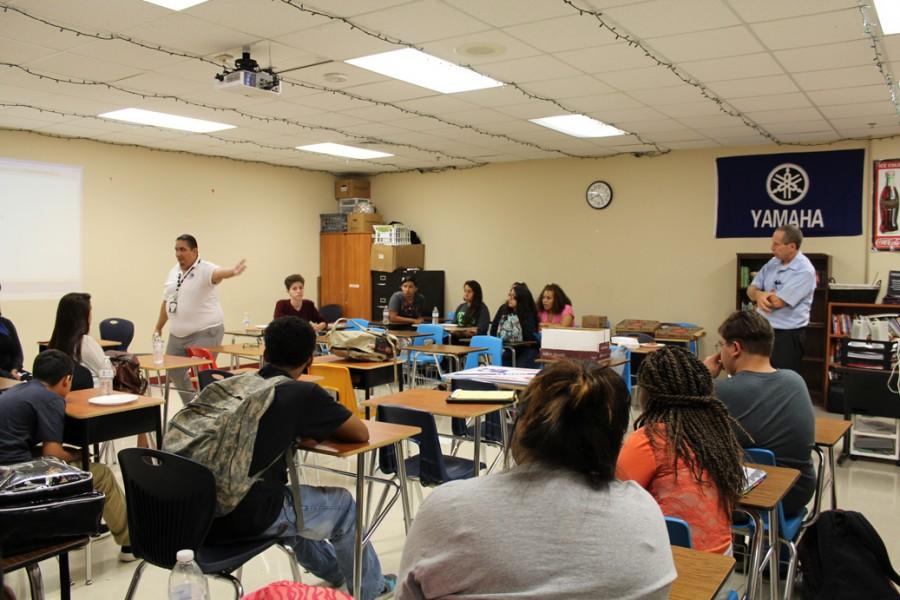 It’s a big team with different ways on different days. No one ever said debate was easy.

The novice debate team has many bright, creative minds. The team works together to recruit students, while building cases for future stressful tournaments.

“I’m going out there to win,” junior Stephen Blake Henderson says. “And have fun while I do it.”

Henderson, with his dark clothing, tattooed arms and dominating demeanor, has an intelligent mind with great ambition. He wants to show the ones who look down on him what he’s worth. He wants to hold the silver plated trophy, a signal of his victory.

“I joined debate because I love to argue and I love to learn new things,” Henderson says.

With a desire to learn and prosper, Henderson has his reason for joining. His love of arguing and proving his side fuels him and makes him a vital mixture of brains and brawn the team needs.

Reymundo Andrade, assistant debate coach, is considered the second best debate coach in the city. He has fallen behind a coach with about 40 years of debate experience. However, this year, with a new novice debate team, Andrade is hoping he can become number one in the city, proving the worth of not only him, but the debate team.

“Last year, I only coached CX (cross exam) and LD (Lincoln-Douglas) debate,” Andrade said. “This year, I have more responsibilities as a coach. My winning streak is also on the line. I have the pressure to have 11 years of state qualifiers as a coach.”

With 4,000 students on campus, a divided state of culture, talents and a wide variety of personalities, Judson High School makes a wonderful place to discover and find willing characters to bring their mind and heart into debate.

If one enjoys the intellectual conversations, the feeling of community and family, being a part of a true, winning team, and prove ones worth, join the debate team in E205.