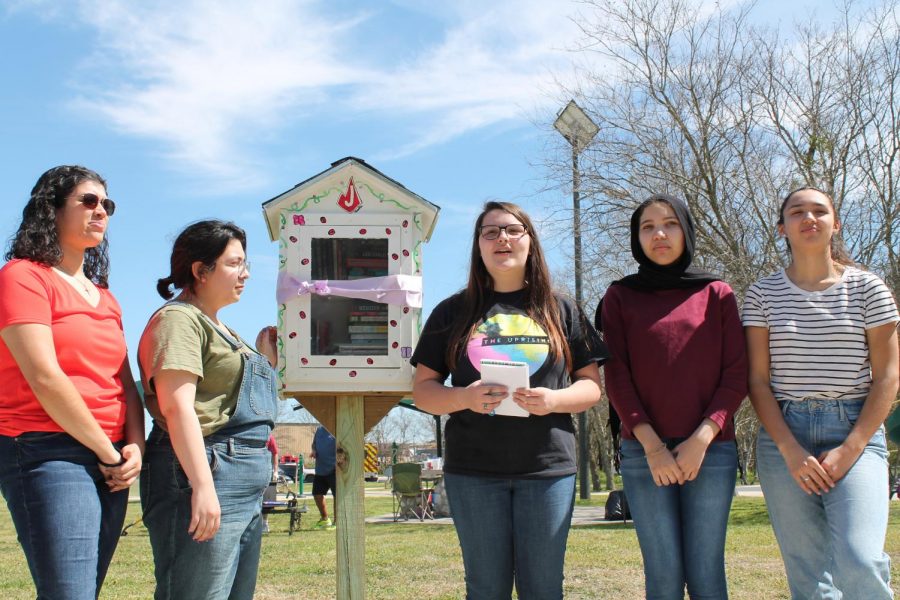 Every year, many different clubs and organizations on campus strive to make a lasting impact in their community through various service opportunities. These typically include the same events and organizations. This year, Judson High’s Drama Club decided to move in a different direction.

The club decided to create and install a Little Free Library in the Northampton Park.

Along with its unveiling on February 29, 2020, Drama Club members gathered together to clean the park and participate in a community cookout.

“On Saturday, we arrived at the park to make preparations for the library,” senior Drama Club Vice-President Serenity Gonzalez said. “We cleaned the park up and then did the unveiling and celebration.”

The Drama Club members knew that with various competition schedules, many of them would not be able to dedicate hours on a saturday to participate in traditional community service opportunities.

“We, as a department, are super busy, and we don’t necessarily have a lot of time to go out and do traditional volunteer work, so when this idea came up, we really liked it,” Gonzalez said.

The idea of the Little Free Library was presented first by one of the officers.

“We were talking about what to do for our service project when our secretary presented the idea to us,” junior Drama Club Co-President Joshuah Mayo said.

The idea became an immediate hit with the officers and club members, providing a unique possibility to reach more people.

“We wanted to give back to our community in a way that isn’t frequently done,” senior Drama Club Historian Nevaeh Kelley said. “We decided that giving the gift of knowledge and books was the best way to give back to multiple groups of people.”

The group was extremely excited to put this project in motion, but there were many different steps to go through before its installation.

“We started near the beginning of the year,” sophomore Drama Club Treasurer Julianne Chapa said. “First, we had to figure out what it would look like,what it would hold and where it would be, then we went to the city council to get it approved.”

After the approval, the Drama Club began constructing the Little Free LIbrary, before decorating it and adding a personal touch.

“One of the officers and her family put the work into building the library,” Drama Club sponsor Mrs. Larissa Lyons said. “We wanted to do handprints because there is nothing, I think, that there’s no better symbol for community than handprints.”

The club plans to continue this outreach for years to come and hopes that children and adults alike will be able to benefit from the Little Free LIbrary.