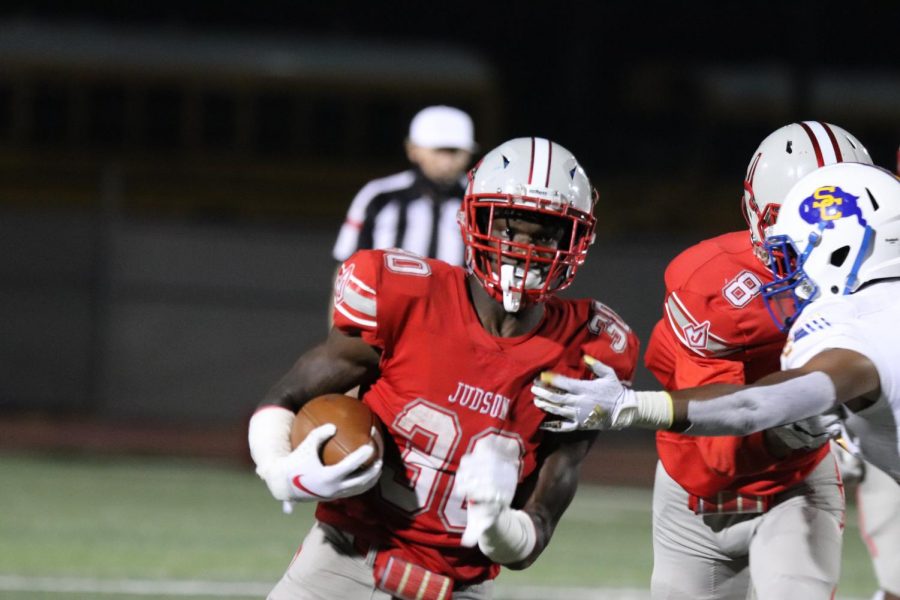 Senior De'Anthony Lewis breaks free from a defender to gain a first down and more. The Rockets beat Clemens, 34-28.

On Thursday, October 15, the Judson Rockets faced off against the Clemens Buffaloes for the CW35 Thursday Night Lights Trophy.

Kickoff began with the Buffaloes receiving the ball as they tried to gain momentum for a first down. The Buffaloes threw a pass into the flats to get a first down, shortly after the Buffaloes threw deep into the corner of the end zone and completed a one-handed grab to give them the first lead of the game at 7-0. Rockets started their offensive drive with a handoff to sophomore Anthony Evans that ended up a loss of three yards. Rockets ended up botching the punt making them lose yards along with a turnover.

The Rocket defense forced a third-down which led to senior Donnie Moody getting a sack to force a punt giving the Rockets the ball back with two minutes left in the first. During their drive, senior De’Anthony Lewis got a big run to put the Rockets past the 50 yards line. The play after, senior Isaiah Washington also ran for a large gain to put the Rockets into the red zone. The Rockets got shut out to end the first quarter with the Buffaloes up by seven.

The second quarter started off with Rockets forcing a turnover and then Lewis rushing for another big gain. Quarterback Michael Burroughs tried to run for the first down but got knocked out of bounds forcing a third down. Lewis broke free for the first down and ended up rushing into the red zone as the Rockets tried to capture their first seven. The Rockets ended up fumbling the ball causing the Buffaloes to scoop it up and take it to the house, putting them up 14-0. On the next offensive drive, Lewis received a swing pass and took it all the way into the end zone to finally put the Rocket on the board with seven. During the next defensive drive, junior Treylin Payne intercepted the Buffaloes quarterback and took it all the way into the end zone, tying the game for the Rockets at 14-14 ending the second quarter.

With a great halftime show coming to an end, the Rockets received the ball and senior Davion Wilson tried to break free but got wrapped up right before crossing the first down marker. The Rockets ended turning the ball over once again in the red zone. As the Buffaloes tried to regain the lead, the Rockets gained momentum and forced another turn over to get the ball back. After continuous turnovers by both teams, Lewis finally ended the drought with another rushing touchdown that put the Rockets up by seven, ending the third quarter at 21-14

The Buffaloes received possession via kickoff and started marching downfield. They made their way into the red zone after a huge hurdle, but Senior Kameron Lopez pressed the quarterback and almost got a sack causing an incomplete pass. The Rockets managed to stop the Buffaloes on the one-yard line with a fumble and the recovery. The play after, Burroughs found a lane and charged into it rushing all the way into the end zone to further the Rockets lead at 27-14. The Buffaloes tried to gain momentum but couldn’t seem to gain a yard on the Rocket’s defense. The Buffaloes managed to complete another deep pass into the end zone to put them down by six. On the next offensive possession, Lewis single-handedly carried the Rockets all the way into the red zone as they looked for another touchdown to put the game away. Burroughs secured the game with a diving touchdown to give the Rockets a 13-point lead. The Buffaloes tried to come back with a touchdown of their own but it wasn’t enough as the game came to an end with the final score being 34-28.

The Rockets head into a bye week this upcoming week, afterwards, the Rockets will play the East Central Hornets at Hornet Stadium on October 30.