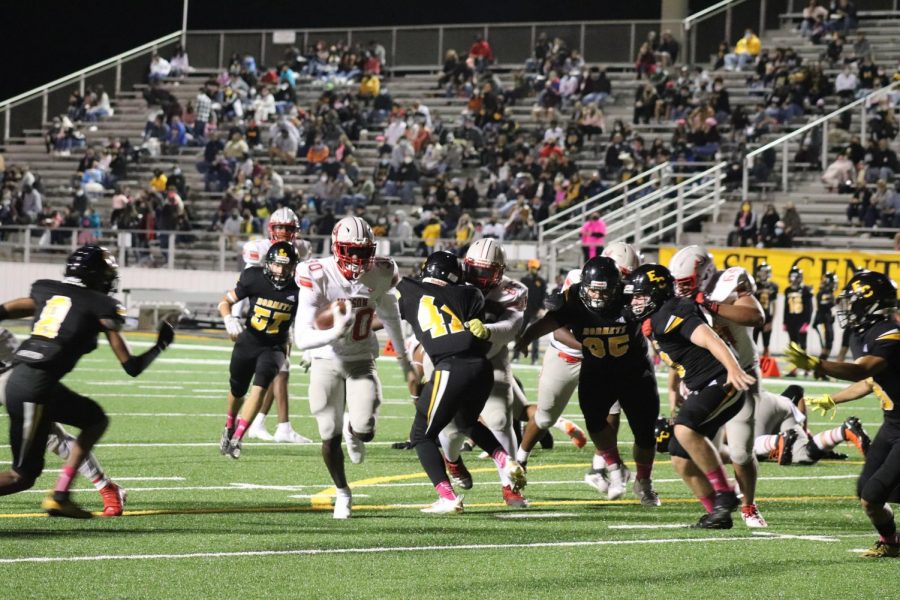 Senior De'Anthony Lewis runs through a group of Hornet defenders during the football game on Friday, Oct 30, 2020. The Rockets beat East Central 48-13.

To begin the game, Judson forced the Hornets to punt the ball away which gave the Rockets possession on the 33-yard line. Junior Micheal Burroughs then ran in to score Judson’s first touchdown of the game, which was quickly followed by the Rockets regaining possession of the ball after a botched return attempt by the Hornets. The Rockets easily scored their next two touchdowns as senior De’Anthony Lewis ran in for Judson’s second and sophomore Anthony Evans scored a 60+ yard touchdown for Judson’s third of the game. The first quarter ended with Judson in the lead 20-0.

To start the third quarter, senior Jason Bratcher caught a one-handed touchdown which was the only memorable moment of the quarter, ending the third with Judson in the lead 48-7. To begin the last quarter of the game, although the Hornets scored their second and final touchdown of the game, the quarter was ultimately quiet and the Rockets went on to defeat the Hornets 48-13.

On Friday, November 13, 2020, the Judson Rockets (4-1) will face off against the Smithson Valley Rangers (4-1) at D.W Rutledge Stadium for this year’s Homecoming game.