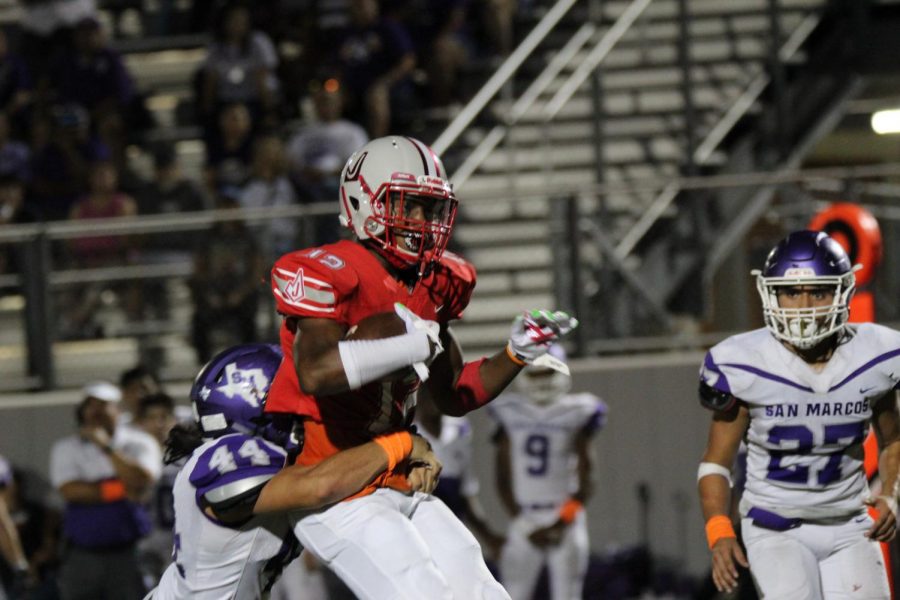 Senior Amarea Bailey-Davis drags an opponent as he enters the end zone. The Rockets beat the Rattlers, 62-14.

On Friday, September 27, the Judson Rockets (4-0) faced off against the San Marcos Rattlers (0-5) at the annual Homecoming game.

To start the first quarter, the Rockets tried to pull off a tricky onside kick but the Rattlers came up with it. The Rattlers went on to have a very long drive, which led to their first touchdown putting seven on the board for the Rattlers early. The Rockets immediately responded with junior De’Anthony Lewis as he rushed for his first touchdown tying the game at 7-7. Rockets again kicked the onside, but this time recovered the ball to give the offense another chance. Senior Mike Chandler used that opportunity as he rushed in for a touchdown increasing their lead to 14-7. Both teams came up short on their possessions to end the first quarter.

With the second quarter in play, the Rockets failed to convert on third down, but gave the ball to Lewis on a fake punt for the fourth down, rushing in for the first. Senior Amarea Bailey capitalized on the first down as he caught his first receiving touchdown of the game, making the score 21-7. The Rattlers were then stopped and forced to turn the ball over, which led to junior Davion Wilson to gain big yards off a slant. Shortly after, Chandler rushed in for his second touchdown of the night, putting the Rockets at a lead of 28-7. Rattlers finally gained some momentum as they rushed for their second touchdown of the night, putting them at 28-14.

However, nothing was stopping the Rockets as Bailey found the end zone as he shook past a defender for a touchdown, making the score 35-14. Rockets again kicked the onside and recovered it, leading to Wilson, who scored off a wide-open deep ball putting the Rockets up 42-14. The Rockets defense continued to stop the Rattlers as they blocked a punt attempt. Moments after, sophomore Andre Jones caught a slant and dove in for a touchdown, making the score 49-14. With the Rockets defense having momentum, sophomore Treylin Payne intercepted a pass to give the Rockets another chance before the half ended. Junior Trey Brown did exactly what was expected and rushed for his first touchdown of the night putting the Rockets up 55-14 at the half.

With the first play of the third quarter, the Rockets defense caused a fumble which was picked up and returned by Payne for another seven points, putting the Rockets at a score of 62-14. After a long drive by Judson and continuous stops by the defense, the third quarter ended at 62-14.

During the fourth quarter, the plan was to run the clock out and that’s exactly what the Rockets did to secure their fifth win of the season at the score of 62-14.