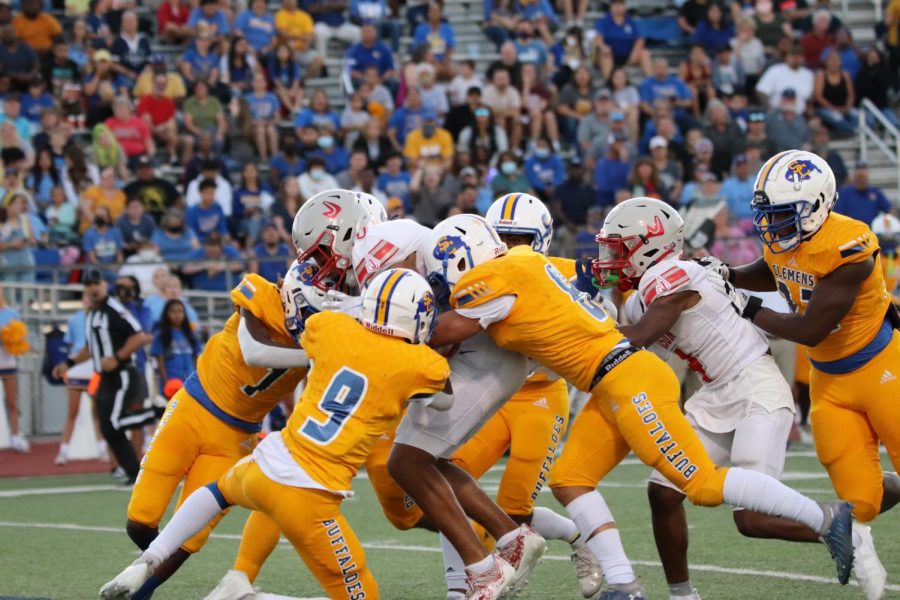 Junior Gavin Harris pushes through the Clemens defense, in an attempt to score. Football ended up falling to Clemens, 17-14.

The third quarter was the most uneventful quarter of the game, with both teams trading the ball back and forth. Needless to say, both teams found themselves unsuccessful, ending the third 17-7, Buffaloes.

The fourth started with the Rockets slowly inching their way up to the end zone where they found no success. In an attempt to still score, the Rockets attempted to make a field goal. However, they missed, holding the score 17-7 with five minutes left in the fourth. The Rockets found themselves in the end zone once again. where they scored their second touchdown of the night by sophomore Nathaniel Stanley with a 44-yard run. A flag was called on the play. However, after the coaches raised concerns about the play, they gave the run to the Rockets, allowing them to catch up, 17-14, with two minutes and thirty seconds left in the fourth. The Rockets tried their hardest to push through Clemen’s defense, but found no success, ending the fourth 17-14, Buffaloes.