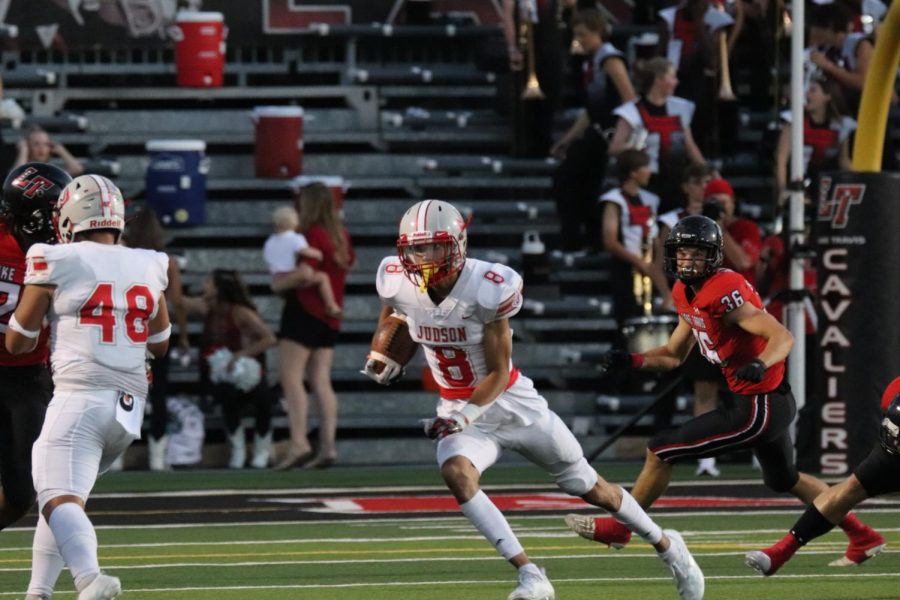 Senior Andre Jones receives the ball after the kick off from Lake Travis. The Rockets fell to the Cavaliers, 52-20.

On Friday, September 3, 2021, our Judson Rockets faced off against the Lake Travis Cavaliers for one of the biggest games of the season. With Treylin Payne out with a calf injury, the Rockets lost one of their key defensive players in a big-time rivalry game.

Lake Travis struck first with a 70-yard drive downfield, which made the score 7-0, Lake Travis at the start of the first quarter. Off the kickoff, senior Andre Jones took the ball upfield for Judson to take possession. On the second play of the Rockets offensive drive, senior Marvin Beasley took the handoff from senior Michael Burroughs for a 62-yard touchdown downfield, which made the score 7-7, Judson, after junior Adrien Cortes made the field goal attempt. After a high snap over Burroughs, Lake Travis recovered the ball and kicked a field goal before the first quarter concluded, making the score 10-7, Lake Travis, as the Cavaliers regained the lead.

At the start of the second half, Lake Travis had all the momentum. As the third quarter was underway, Burroughs tried to lead his offense to the endzone, until he threw an interception that was ran back for a touchdown. With Lake Travis scoring on a 2-point attempt, they extended their lead making it 38-7, Lake Travis. They scored again with five minutes left in the third quarter. Judson found some light, as they drove the ball downfield on their offensive series. Stanley had a 2-yard run into the endzone for a Rocket touchdown making the score 45-13 with Lake Travis still on top.

At the start of the fourth quarter, Lake Travis had all the momentum in this game. In the first play of the fourth, Burroughs scrambles to find an open receiver, only to fumble on the play. With Lake Travis not capitalizing on the fumble, the Rockets forced a fourth-down situation. Senior Alan Caracheo was set to take the punt, only for it to slip out of his hands and bounce all over the field.

As Judson and Lake Travis fought for the loose ball, junior Anthony Evans III scoops up the loose ball on a remarkable run downfield for a touchdown, making the score 45-20, Lake Travis with the lead. With time winding down, Lake Travis had this game pretty much in their favor. On the kickoff, Lake Travis found a hole in the Rocket’s defense and scored off kickoff making the score 52-20, with all hope lost for the Rockets as the clock winds down. On one of the last attempts to score left in this game, sophomore Kashif Tibbs fumbled the ball midfield and Lake Travis recovered the ball, with five seconds left in the game. Lake Travis won this ballgame with a final score of 52-20.

The Rockets (1-1) are set to take on A&M Consolidated (2-0) on Friday, September 10, 2021, for the third and final preseason game of the year at Texas State University in San Marcos, TX.