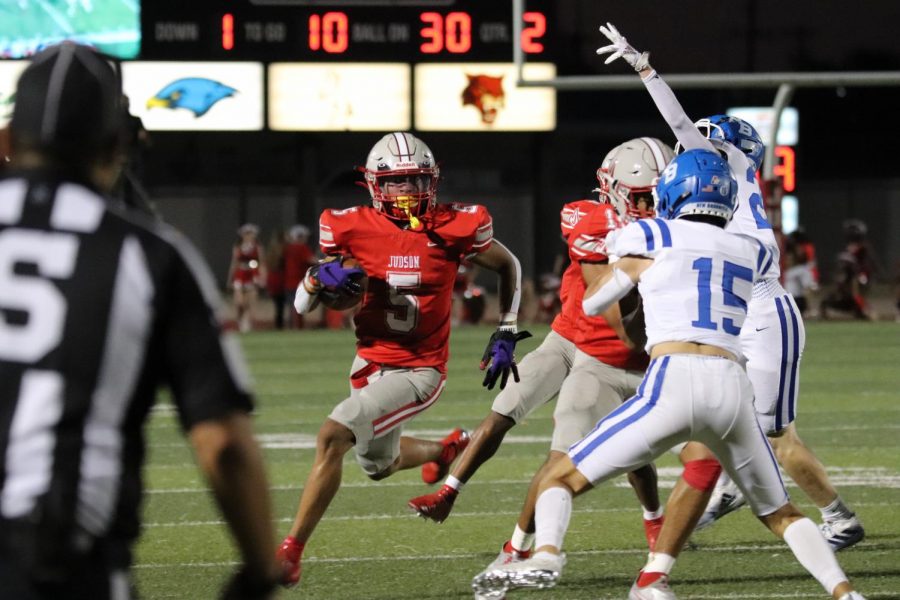 Junior Anthony Evans carries the football downfield towards the zone. Football fell to the Unicorns, 24-21.

To start the game, the Unicorns receive the ball and return it for 15 yards. After an unsuccessful drive, the Rockets gained possession on the 32-yard line for their first drive of the game. The Rockets slowly moved the ball down the field but their drive came short, being stopped on the 50-yard line. It was caught at the Unicorn’s 22-yard line where they gained possession. To start their second drive, the Unicorns again had a short drive due to a pick caught by junior Julius Calhoun that led into the second quarter. The first quarter ended scoreless by both teams.

Following the Rocket’s interception, they ended their next offensive attack with a 40-yard drive and a touchdown by junior Anthony Evans III, making the score 6-0. Junior Adrian Cortez scored the field goal, making the score 7-0. The Rockets kicked off to the Unicorns but quickly took the returner down after a short gain. The start of the Unicorn’s first drive of the second quarter did not go as they planned as a pass was tipped by the Rocket’s senior Treylin Payne and caught by senior Dantrelle Eggleston, and returned for 20 yards.

Following the interception, the Rockets offense capitalized with a 20-yard touchdown run by senior Marvin Beasley, making the score 13-0. Cortez kicked another field goal to make the score 14-0. Following the kickoff, as the Unicorns started their drive, it came to an end very quickly as Calhoun made another big play, stripping the Unicorns running back. After an unsuccessful drive by the Rockets, they punted the ball away and gave the Unicorns time to score before the half. And that is what they did, striking right before the half and making their field goal making the game close with a score of 14-7.

The start of the third quarter was uneventful as each team experienced defensive stops multiple times. As the Rockets got the ball, they looked deep for a pass to senior Andre Jones but it was incomplete, leaving the Rockets with no choice but to punt. With another big Rocket defensive stop, it opened up a door for the offense. The offense took another deep look to find junior Gavin Harris open and with a few broken tackles, he scored, making the score 20-7. Cortez made the field goal once again to make the score 21-7. The rest of the quarter was all New Braunfels, as they scored again making the score 21-14 and taking the game to the fourth quarter.

At the start of the fourth quarter, it was still all New Braunfels, as the Rockets were causing penalty after penalty. Due to that, it left holes through the defense and the Unicorns scored again, making the score all tied 21-21. The Rockets received the ball but were not able to move down the field and were stopped on their own 15-yard line, forced to punt. As the Unicorns regained possession, they slowly drove down the field draining the time clock to only six seconds left, and set up to kick a field goal. The field goal was up and good, making the score 24-21.

With only one second left on the game clock, Evans tried to take one last kick return but was stopped after a 27-yard run. New Braunfels took this game with a final score of 24-21.