Football sends the Hounds to the pound 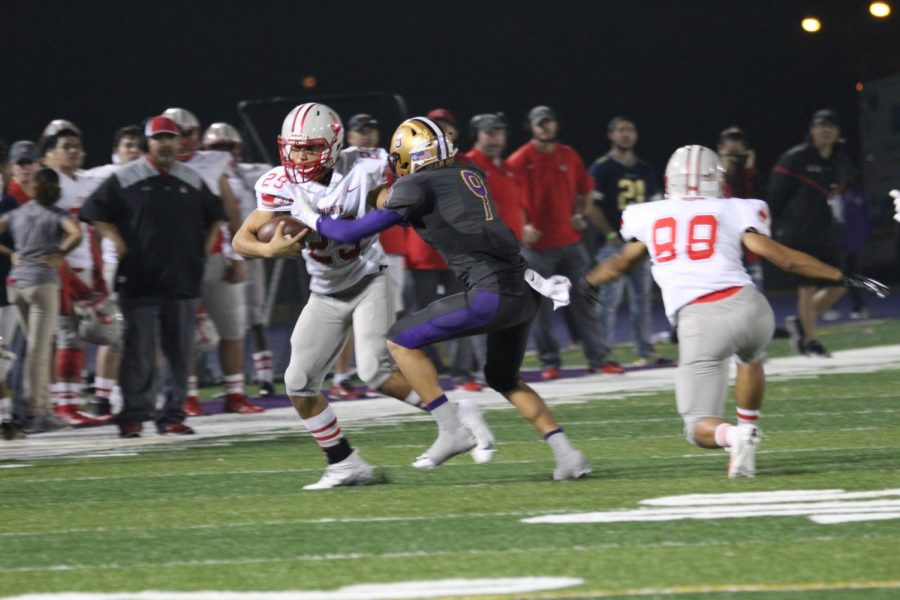 The Rocket receiver stiff arms San Benitos defender to create space. The Rockets ended the night with a score of 69-18.

On Friday, November 30, the Judson Rockets traveled to San Benito High Schools to face  Greyhounds for the fourth playoff game of the season.

As soon as the first quarter started, Senior Demarvin Leal blocked a Greyhound pass attempt. The Rockets got the ball back right away and junior Mike Chandler took it to the 25-yard line to set up a Rocket field goal, making the score 3-0. The Greyhounds try to come back but threw to senior Joewel Crawford who intercepts the pass for a Rocket touchdown, making the score 10-0. The Greyhounds again threw another interception, which was caught by senior Gabriel Jellison, which set up senior Sincere Mccormick for his first touchdown of the night, making the score 17-0.

During the second quarter, junior Antony Shelton scored an 89-yard catch and ran for a touchdown to put the Rockets up 24-0. With another stop to the Greyhounds offense, senior Sincere McCormick came back and rushed for his second touchdown of the night, making the score 30-0. The Rockets got the ball back immediately with another interception by Crawford, which set up Chandler to rush for a 29-yard Rocket touchdown, changing the score to 38-0. To end the second quarter, Shelton got his second touchdown of the night, putting the Rockets up by 45.

With back and forth action from the Rockets and the Greyhounds in the fourth, Judson finally pushed through and was able to get a field goal, making the score 69-12. The Greyhounds came back a couple drives later and scored their third touchdown of the game, but missed their third two-point conversion in a row to end the game at a score of 69-18.

The Judson Rockets will play the Lake Travis Cavaliers this Friday at the Alamodome for round four of the playoffs.