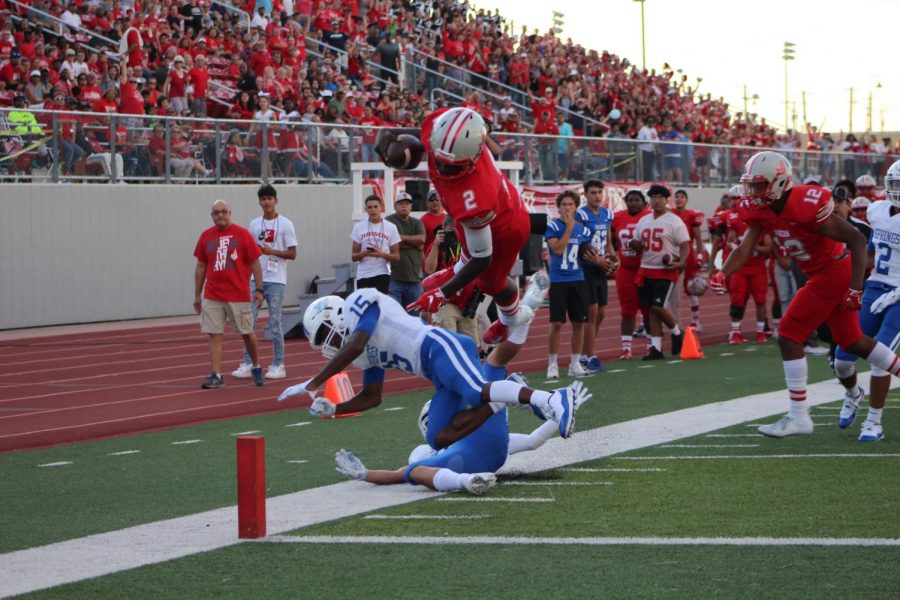 Mike Chandler dives into the end zone to score during the first quarter. The Rockets ended up winning the game, 46-28.

The Judson Rockets opened the 2018-2019 football season on September 1, 2018, against the Clear Springs Chargers from Houston. Our Rockets ended up beating the Chargers, 46-28.

Clear Springs received the kickoff deep and returned it for 35 yards, putting them in at Judson territory. At the snap of the ball, Clear Springs quickly passed and completed for 13 yards, which led to a breakaway run, putting up the Chargers 7-0. The Chargers kicked off to the Rockets, taking the ball down to their own 40. Junior Mike Chandler took the ball for himself and led the team by hurdling over the Chargers defense to make a first down. Senior Sincere Mccormick received the football and charged it into the end zone, tying the game 7-7. The Rockets kicked off to the Chargers, who’s drive immediately got halted by senior Kevin Wood, who intercepted the Chargers offense, returning for a touchdown, putting the Rockets up 14-7. The Chargers quarterback passed for a touchdown tying the game at 14-14 ending the first quarter.

At the start of the second quarter, McCormick ran for seven yards, putting the Rockets in a perfect spot for Chandler to pass the ball to junior Anthony Shelton, who caught Judson‘s third touchdown of the game, putting Judson up 20-7. Again, the Chargers returned a kickoff into Judson territory. The Rockets senior Michael Washington II and senior Payton Watters put a stop to their offense and forced the Charges to punt the ball away. Junior Amarea Bailey made a catch on the Chargers 40, which set up Wisdom, who dashed and hurdled his way into the end zone to put the Rockets up 27-14. During the next Rockets offensive drive, Chandler threw deep to senior Marcus Harmon, who made the catch and put Rockets up to an outstanding score of 33-14 to end the first half.

Judson received the ball at the start of the third quarter, but their drive didn’t last long as Harmon ran for his second touchdown of the night, making the score 43, 14. The Judson defense was hungry that night as senior Mauricio Miranda, senior Joewel Crawford, and senior Kenyon Morgan all contributed into forcing the Chargers to kick the ball to the Rockets. The Chargers defense finally stumped the Rockets, forcing them to give up the ball. The Chargers made another breakaway run, breaking two tackles and battering their way into the end zone making the score 43 – 21 ending the third quarter.

To start the fourth, the Chargers kicked off to the Rockets, where senior Gabriel Jellison returned the kick for a whopping 57 yards, which set up junior Humberto Villareal to kick a 38-yard field goal that soon put the Rockets up 46-28. The Rockets defense continued to eat away on the Chargers offensive drives, which soon led to Judson coming out on top of Clear Springs, making them 1-0 in their season debut.

The Rockets will be the visiting team next week for the annual Hammer Bowl against Wagner.