The Fuel Online • May 3, 2022 • https://thefuelonline.com/freshman-faces-highschool-after-pandemic/ 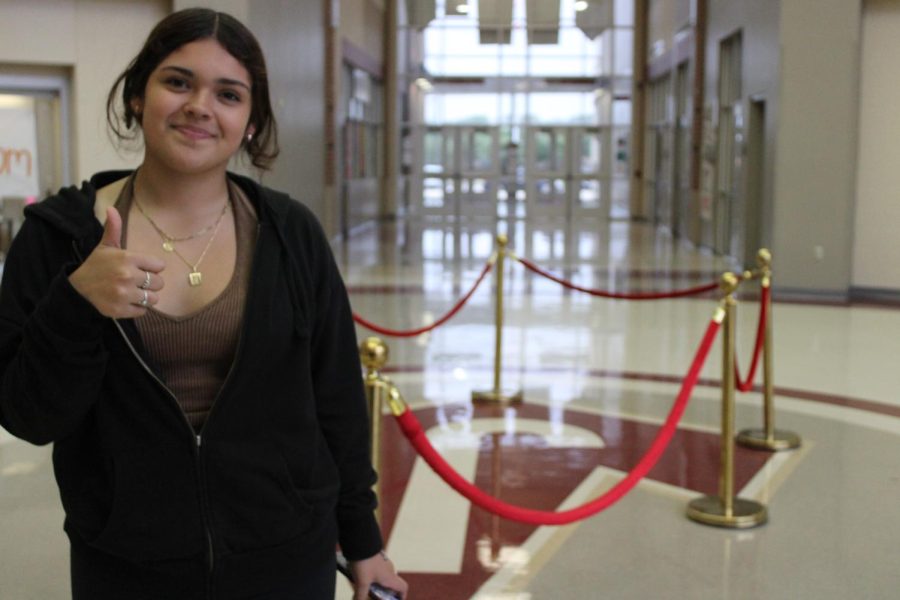 Freshman Mariafernanda Reyes stands at the Diamond J at the end of a school day.

Everyone imagines the first day of high school: walking into those double doors filled with hope of accomplishing at least one thing that sets them apart. Unfortunately, when COVID-19 hit in March 2019, it effectively shut down schools and changed the course of education. It was the beginning of online learning which, unfortunately, forced a general decline in both student communication skills and in-person interaction with peers.

Setting them apart, the current freshmen are the first class since the pandemic to experience high school back on campus from day one. Yet, the question remains: after a year of online learning, were they prepared for high school?

Freshman Mariafernanda Reyes says she, in fact, was not prepared. In August 2021, at the start of the school year, and after spending the last year and a half predominantly attending classes online, Reyes was faced with in-person everything. And, she says, the transition was hard.

Reyes sensed that nothing was going to be normal this year even though we were returning to the classroom. One of the first signs for her was that, even though we were back in school, COVID was still a part of our daily lives. Everyone seemed to be cautious, scared.

So, what were those first few weeks back on campus really like? Judson ISD staff and students were required to wear masks for the first few weeks. The feeling was still there: I don’t want to catch COVID. Reyes says that the experience was not normal. One little cough, and people eyeballed each other.

“It felt a bit strange to be coming back after COVID, especially because I was not as used to talking to people anymore,” she said. “Certain things had become concerning even though they should have been normal such as just coughing or sneezing.”

Another concern for many was the transition back to in person learning after a year and a half of attending online classes. During the height of the pandemic, when schools were largely shut down, students weren’t expected to get up early or even figure out what to wear. Picture students simply rolling out of bed and logging into class. It wasn’t good.

So, when returning for this school year, Reyes says she was concerned. Concerned about making conversation again because, in her opinion, the year of online classes caused many to lose communication skills and confidence.

“It was a bit hard coming back to school, but I prefer being at school over being online,” Reyes said. “It was hard having to talk to people in those first few months because I was so used to being at home by myself. Over time, it felt natural again, though.”

Reyes says that in those first few months back on campus, the general feeling among students was that they hadn’t learned much the year before. Students were worried that they were not prepared academically to step into their new grade.

Reyes had a unique situation during the online learning year because she also had a job and many times went to work instead of online class. The impact of those choices was great.

“My grades definitely have been impacted due to COVID and online learning,” she said. “And I feel like I barely learned anything my 8th grade year because I wasn’t able to attend online classes due to working. Sometimes, I was scheduled during school hours, but I always made an effort to login to my classes during my break.”

Being back on campus for almost a full year has provided a great experience for incoming freshmen that has helped them mature. The in-person experience provided her a chance to engage in real connections again with other students.

“Being back I got to talk to people I hadn’t talked to in months,” she said. “I got to see people’s faces and hear their tone. I had spent a year basically texting people as my only form of communication, so it was nice to be around people again.”

Now that COVID is the new normal and school feels somewhat as back to normal as it can be, Reyes and her freshman counterparts are ready for what the rest of high school holds. Despite it all, Reyes has hope for the next few years of high school.

“I am excited that I will actually be able to go to tournaments and engage with other students and feel comfortable in the classroom,” she said. “I’m on the tennis team, and it feels good to finally have normal practices. I’m ready to actually experience high school the way it was meant to be.”