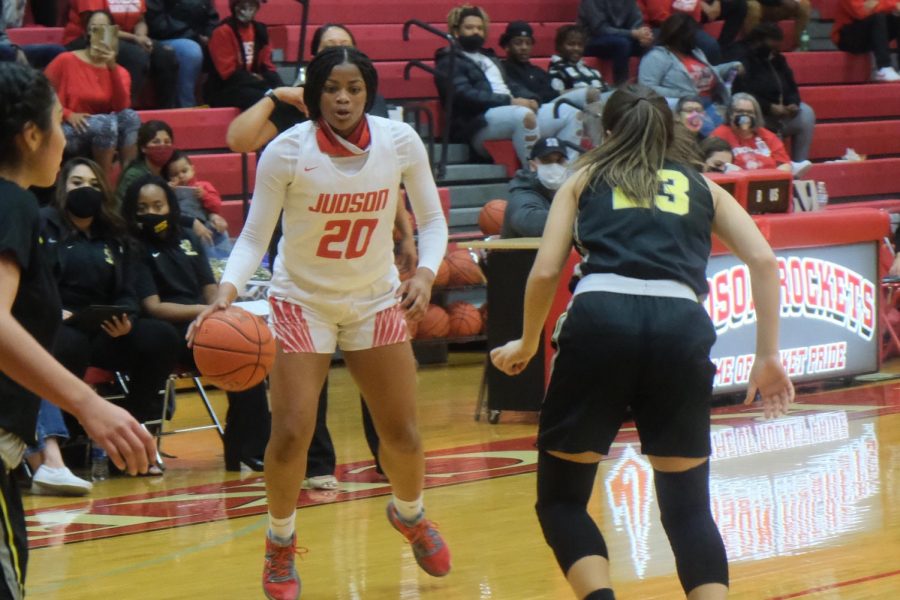 To begin the game, the Rockets found themselves tied with the Hornets 5-5 as both teams aggressively tried to maintain a sturdy lead. Senior Kierra Sanderlin dominated early on both sides of the court as she racked up two easy steals and four quick points to help push the Rockets lead to 12-7 with 4:55 left in the first. The Rockets were dialed in on both offense and defense as they were able to keep the Hornets at seven points while they rained three’s to increase their lead to 18-7. Sanderlin continued her domination as she crossed a Hornet’s defender for an easy pull up mid-range to increase the Rockets lead to 23-13 with 1:26 left in the first quarter. The Rockets defense seemed almost impenetrable as they ended the first quarter still the lead 26-13.

To start the second quarter, senior Kiyonna Botello hit her fourth three of the night, second back-to-back, as the Rockets lead increased to 32-13. A couple free throws for the Hornets allowed them to shrink the score to 32-17 but to no avail as the Rockets defense got two back-to-back steals the next two possessions for four total points. The Rockets seemed unstoppable as yet again they took control on both sides of the court and in doing so. They found themselves up 49-23. To end the second quarter, Botello hit her sixth three of the night to end the second with the Rockets in the lead 52-23.

To begin the last quarter of the game, sophomore Zaadiyah Stovall had a wide open layup to set up Mabry for another and-one basket to push the lead to 78-34 after the made free throw. The Rockets called a timeout with 3:32 left in the fourth as they found themselves up 80-36. Another block by Mabry set up a and-one basket by junior Michaela Verrett, which pushed the lead to 83-36 after the made free throw. The Rockets bench received a technical foul and the Hornets got two free throws but missed them both as the score remained 83-36 with Rockets in the lead. The Hornets were able to score a few baskets off of layups and free throws but were unable to stop Judson’s dominant performance on both sides of the ball. With three seconds remaining on the clock, the Rockets hit another three to end the game with the Judson Lady Rockets defeating the East Central Hornets 92-44.