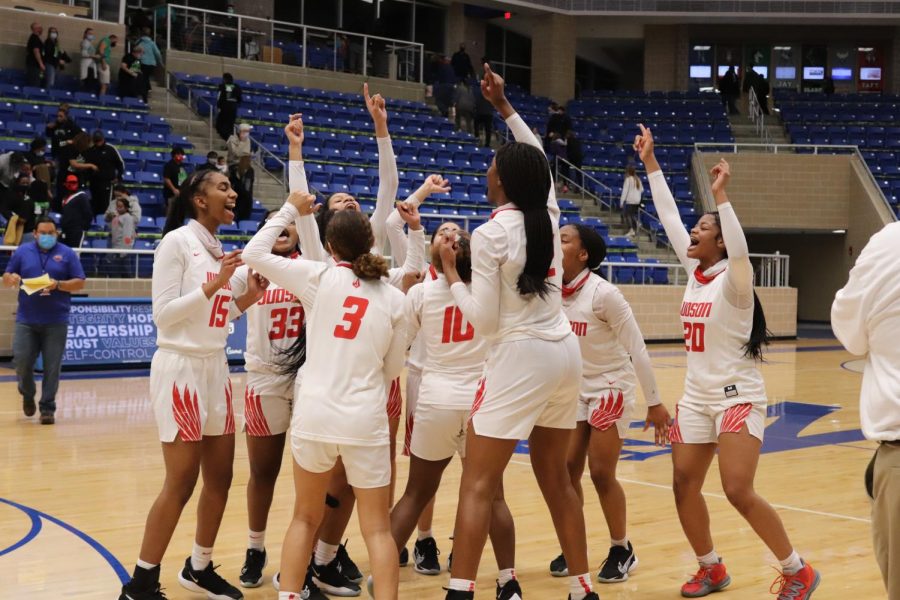 The girls basketball team celebrates in the middle of the court at Northside Athletics Gym. The girls will advance to the next round of the playoffs.

On Tuesday 3, 2021, The Judson Lady Rockets (25-1) faced off against the Reagan Rattlers (22-3) at the Northside Gym located on the Farris Athletic Complex.

To begin the game, the Rattlers started off strong as they gained a 11-4 lead 1:15 left in the game. The Rattlers aggressive defense was too much for the Rockets as the first quarter ended with the Rockets trailing 12-4.

To start the second quarter, mental mistakes cost the Rockets a chance at a comeback as another turnover led to another score for the Rattlers. Senior Kierra Sanderlin, trying to bring her team back in the game,  got a bump steal and a fast-break layup to cap off a 6-point scoring run. The Rockets trailed 10-14 with 5:20 left in the second. Sanderlin powered through to grab her own rebound and score the putback basket to bring the game within two. A foul underneath the basket for the Rattlers set them up to make two free throws and increase their lead to 18-25 after Judson made multiple mistakes on both sides of the floor.

To begin overtime, both teams continued to go back and forth but failed to capitalize on the other’s mistakes as both teams remained tied at 52-52 with 1:12 left in overtime. A steal by Sanderlin set up an easy lay-up in transition as the Rockets took a 54-52 lead with 31.1 second left. As the Rattlers turned the ball over, a foul was called, which gave the Rockets a free throw to increase the lead to three. The Rattlers intentionally fouled Sanderlin as she nailed both free throws to ice the game. With another big-time performance by Kierra Sanderlin, the Judson Rockets defeated the Reagan Rattlers 58-52.