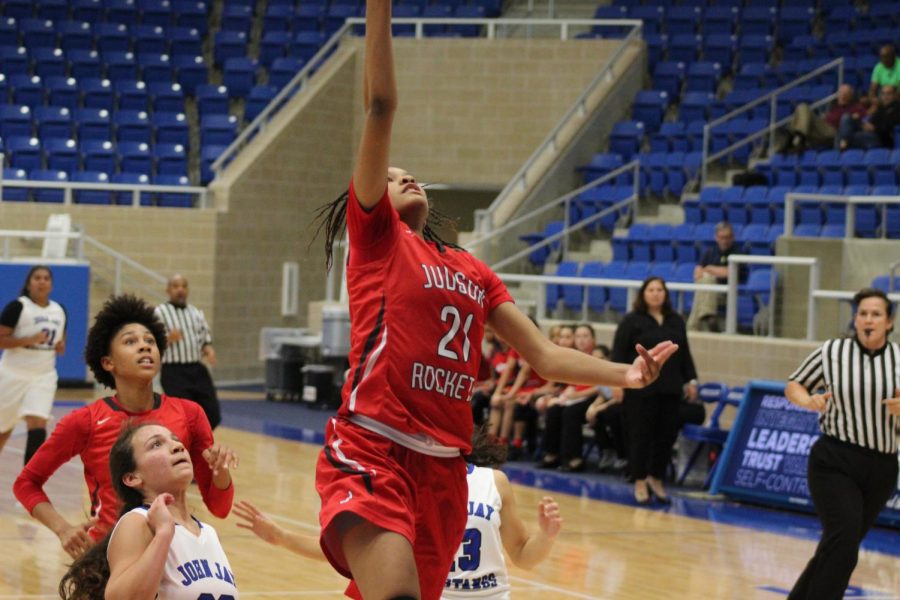 Last night, the Lady Rockets kicked off their season against the John Jay Mustangs at the Northside Gymnasium.

In the first quarter, the Rockets started off slow with some offensive highlights between power forwards Desiree Lewis and Tiffany Mcgarity. Despite having to shake off some first game jitters, the Rockets built a small lead, 18-6.

In the second quarter, the Rockets offense and defense skyrocketed. Defensively blocks from Mcgarity, Lewis, and center/power forward Heaven Mbaruk stunned the Mustangs. On the offensive side, small forward Kyra White knocked down back to back three pointers, while Mcgarity continued to flourish, hitting three pointers and layups. Along with free throws by point guard Corina Carter, the team successfully ended the half, 35-10.

In the third quarter, the Lady Rockets continued their momentum with everyone pitching in either offensively or defensively. The Mustangs tried to pick up the pace in their own offense with impact plays from their senior guards, but the Rockets weren’t leading up. The quarter ended with Rockets leading, 59-25.

In the fourth quarter, the Rockets continued to prove why they are a top contender this year. Mcgarity finished off her standout night 20+ points, White made her fourth three pointer, and Lewis, Flower, and Mbaruk continued to be great offensively and most importantly defensively.  The Rockets beat the Mustangs in their first game, 72-28.

The Lady Rockets will be in action this weekend for the Howie Tournament and at home against the Madison Mavericks on Nov. 14.