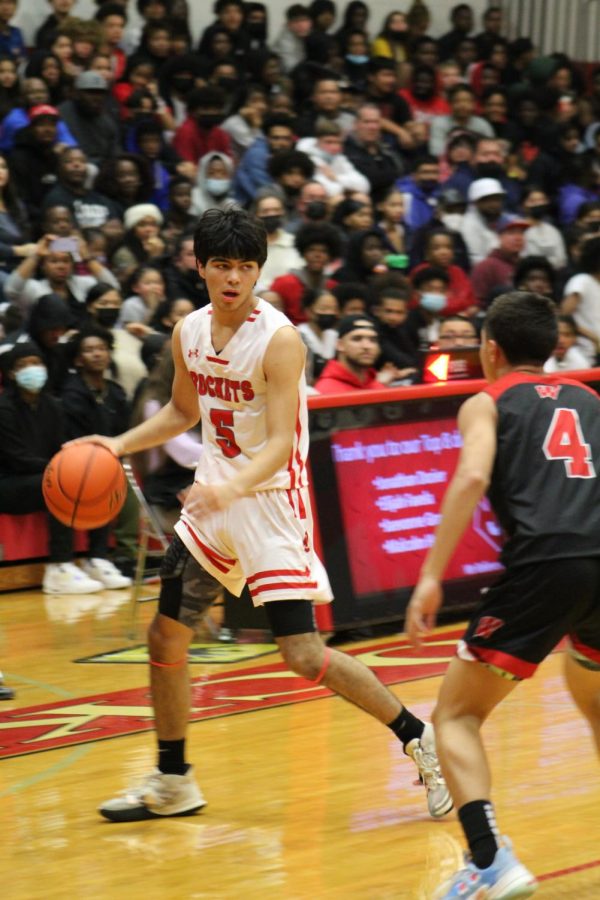 On February 16th, 2022, the Judson Rocket boys basketball team faced off against the Wagner Thunderbirds in a heated rematch that people dubbed the ‘Hammer Bowl Part Two’.

Judson had possession heading into the second quarter. Pillow then had a contested rebound and layup combo to start off, putting Judson in a second quarter lead. At the top of the key, junior Johnny Bowens was then given the ball as he made his way through four Wagner T Birds for a strong layup. After, Pillow dribbled to the paint for an easy layup. Leading into halftime, Brandon snuck a rebound on Wagner’s basket and dimed a pass to Pillow for a slam dunk, keeping Judson in the lead at 30-29.

To start the third quarter, Gomez scored a layup without a Wagner T Bird in sight. Senior Mason Wallace stole the ball and made his way down court to score a layup. Pillow then pulled in a rebound from Wagner’s basket, scrambling two Wagner defenders for an easy layup. Gomez moved fast to shake-off three Wagner defenders for a contested behind-the-back layup in front of three Wagner defenders. Junior Yeral Martinez pulled the ball in for a rebound on the Wagner court for a layup. Martinez then blocked the ball from a T Bird two times in a row, getting the ball to Bowens for a strong layup. With seven seconds left, Wallace stole the ball for a possession leading into the fourth quarter. Judson led, 49-46.

Early in the fourth, Wallace rushed his way to the basket for a quick layup, keeping Judson in front. Brandon pulled in a foul to then score both his free throws. Judson stole the ball from Wagner defenders to get the ball down court to Brandon for a slam dunk with no T Birds there to defend. With a big lead, Judson ticked down the clock by passing the ball around to each Judson player. In the confusion, the Wagner T Birds scrambled and forced a foul. Brandon scored both his free throws to end the game with Judson on top, 69-57. The Judson Rockets are now District Champions.