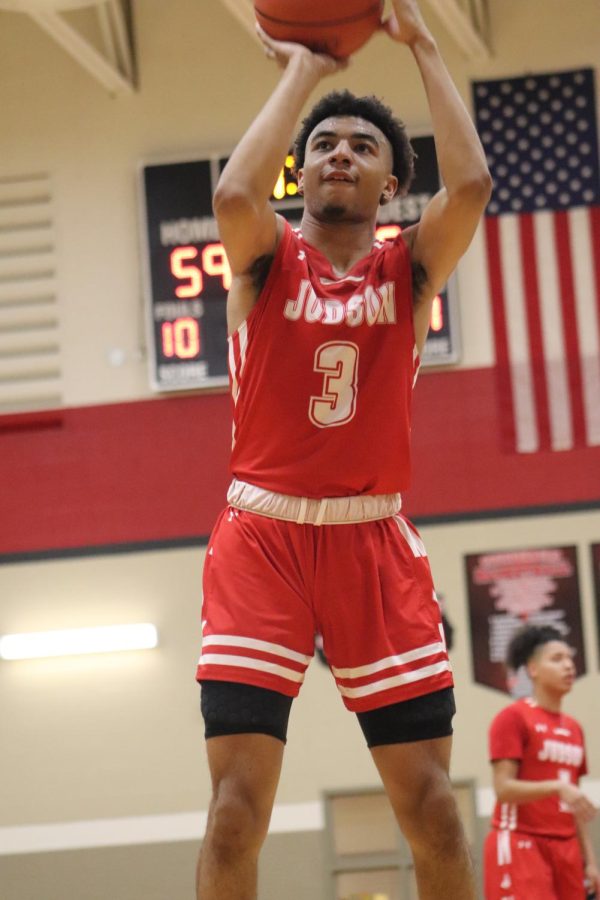 On January 22nd, 2022, the Judson Rockets boys basketball team faced off against the Wagner Thunderbirds in a heated rivalry matchup that people dubbed the “Hammer Bowl Part Two.”

Wagner started the game with the tip off, but missed the shot on the opening carry. Judson quickly answered back with a tough put-back dunk by senior Christian Pillow making the score 2-0 in the first minute. This was quickly followed by a Wagner 2 pointer; however, two back-to-back 3 point shots from Judson seniors, Reginald Steadman and Anariss Brandon, quickly added to the Judson score. Senior Mason Wallace then hit two 3’s in the first quarter putting Judson in the lead going into the second.

In the second quarter, the Rockets came out with lock down defense. Senior Sire Mauvais blocked a Thunderbird shot at the rim, and on the opposite side of the court, Senior Christian Pillow had another rebound dunk off of Mauvauis’s shot making the Rockets lead 35-14.

Senior Anariss Brandon had a great defensive quarter with multiple steals. Pillow had a great night at the rim with a huge slam dunk making the score 37-19 with the Rockets holding the lead. The score was 21-39, Judson, going into the half, with the Rockets still keeping hold of the lead.

Coming out of the half, Judson didn’t pull their foot off the gas. Brandon came out firing with a three pointer to start off the third quarter. Wallace picked up a couple of steals as well, and hit a three down court making the score 48-36 with the Rockets still in the lead.

Going into the fourth, the Rockets had one goal ahead. Win this game.

Wallace came out hot with a clutch three point shot to extend their lead 41-54. Pillow then drove down the court for a good draw, and made two free throws making the score 52-63. Brandon hustled down the court, getting fouled and making all three free points putting the score 66-61 with 25 seconds left.

In the last 10 seconds of the game, the Rockets man-up against the Thunderbirds and lock down their drive in hopes of winning the game.

Within the last 5 seconds, the Thunderbirds failed to make a key set of free throws giving possession back to the Rockets. Brandon then holds the ball for the last 5 seconds of the game. Once the buzzer sounded, the game was over. With a final score of 66-63, the Rockets had secured the win with fans storming the court and cheering on their team.

The Rockets (17-8) enter the second half of their district schedule and will face off against the New Braunfels Unicorns (17-10) at New Braunfels High School on Tuesday, January 25, 2022.