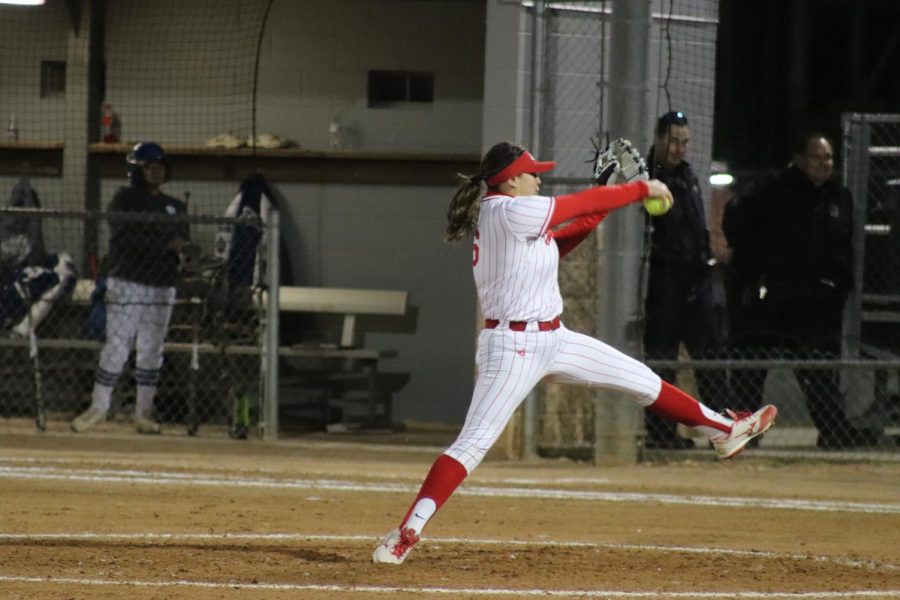 To start off the first inning, senior Emily Ayala set the tone for the night as she struck out all three Bobcats who came up to bat. Nine strikes in a row, Ayala kept the Judson fans screaming and kept the Bobcats at zero.

Starting off the bottom of the first inning, senior Arianna Alejandro struck out after a few tough swings. Mimi Thorton was next up to bat, hitting one strong ball to center field but failing to make it to first base before the ball. With two outs for the Bobcats, the Judson Rockets didn’t let up. Senior Destiny Rodriguez hit a home run right off the first pitch to give the Lady Rockets a run, bringing the Rocket crowd to its feet. After two foul balls, Ayala hit a long ball to far right field for a second base run. Then, junior Queenandra Dunn hit her ball, but it was caught, resulting in the third out. The Rockets were up 1-0 going into the top of the second inning.

In yet another momentum building moment for the Rockets, Ayala again struck out three Bobcat batters in the top of the second inning. This sent the Rocket crowd into the bottom of the second with excitement and kept the score with Rockets on top at 1-0.

In the bottom of the second inning, freshman Tessie Harrison hit a hard shot but was caught by the left fielder. Senior Jada Leal then hit a pop fly to center field into the hands of a Bobcat. Sophomore Marissa Montoya shrugged off the two outs and hit a strong lineout to center field for a single. Freshman Ariyah Allen then struck out after a couple of foul balls to end the bottom of the second with Rockets still in the lead at 1-0.

At the top of the third inning, Thorton picked up a rolling ball and made it to first before the Lady Bobcat, resulting in a quick out for the Rockets. Ayala then proceeded to strikeout her next two batters further building a sense of momentum.

Leading into the bottom of the third inning Alejandro made connections with two balls, but both were caught. Thorton didn’t let the quick out bring her down, and hit a good single; however, Ayala then struckout, dropping the team morale. Dunn was next up to bat, hitting a hard ball to center field that was easily caught. The Lady Rockets were still up 1-0.

Starting the top of the fourth inning, Ayala’s pitch was hit into center field for a Bobcat double. Ayala held on to her momentum, though, and struckout the second Bobcat. The Rockets let up, resulting in two Bobcats making it to homebase. Ayala then made a quick save by striking out her last batter. The fourth inning ended with South San on top at 2-1.

At the bottom of the fourth, the Lady Rockets felt the pressure building but kept going strong. Harrison hit to center field but her ball was caught. Leal got a quick double after the first pitch, picking up the team spirit. Then, Montoya hit an out-of-the-park home run for a quick double. Thorton, Allen, Dunn and Alejandro all scored, building the team morale and leading the Lady Rockets into the top of the fifth inning with a strong lead of 7-2.

At the top of the fifth inning, Ayala struck out two batters. The third out also came in fast when Harrison picked up the ball and threw it to first base for the easy third out. Rockets were still in the lead at 7-2

The Lady Rockets felt the energy from the crowd and kept going strong as they headed into the bottom of the fifth inning. On the first pitch, Harrison hit the ball far into left outfield but it was caught.  Leal and Montoya both struck out making it a quick inning. The Rockets kept the score at a steady 7-2.

At the top of the sixth, Ayala struck out her first batter, caught the ball in the air of the next batter, and then struck out the third batter for an easy three up, three down.

At the bottom of the sixth, Alejandro hit a home run bringing the crowd to its feet yet again.  Thorton then hit and made it to second. Rodriguez hit and scored with Thorton. Ayala, Dunn and Harrison each then scored and put the Lady Rockets up 11-2.

To end the game at the top of the seventh inning, the Lady Rockets got three quick outs, winning the game 11-2.