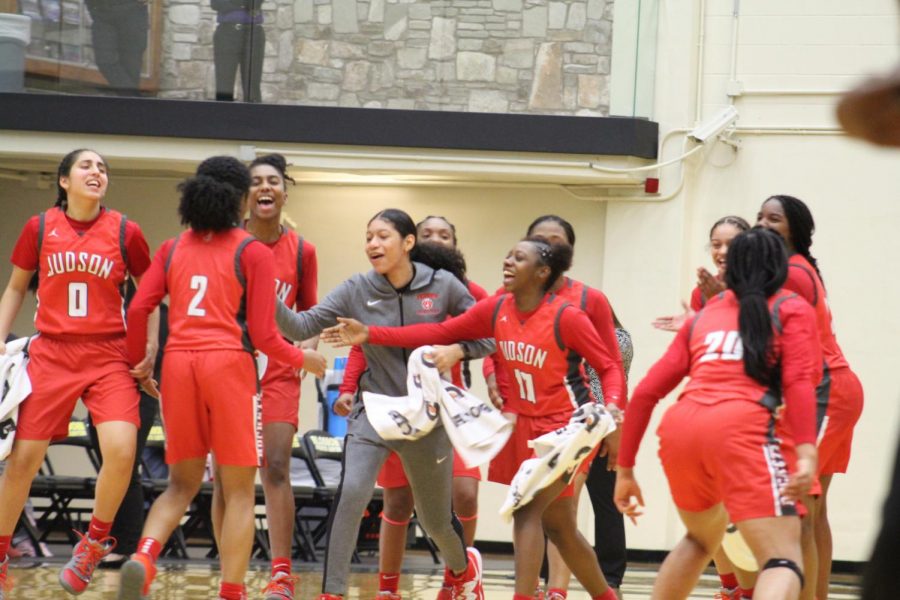 Girls basketball celebrates another win on their road to another state championship. They will play Tuesday, February 25, 2019, at UTSA.

On Friday, February 21, the Judson Lady Rockets (29-8) took on the Brandeis Broncos (26-6) in an area round match at the Littleton Gymnasium at Blossom Athletic Center.

The Lady Rockets sure did have some trouble last week, but they looked to make some improvements against a tough Brandeis Broncos squad.

To start, senior Teanna Huggins showed off her range with a three which put the Lady Rockets up 3-0. While junior Kierra Sanderlin was able to get to the basket early, the Broncos roared back to tie the game up 7-7. The Broncos then took the lead using all of their available weapons on offense and capitalized on bad passes and mistakes from the Lady Rockets. The Broncos ended the first with a 14-16 lead.

The Lady Rockets would not let the Broncos lead for long, as junior Michaela Verrett went on a 9-0 scoring streak which included sinking two threes. The Lady Rockets quickly got up to a 27-18 lead and the offense seemed to have been rolling at that point. But that wouldn’t last for long as the Broncos would then go on an 11-2 run to go into halftime all tied up at 29-29.

In the fourth quarter, there was sparked intensity as the Broncos’ point guard Ariana Villa sank a trey to tie the game at 36-36. But that would be the closest the Broncos would get to victory. Mabry and Sanderlin took the ball to the rim to put the Rockets back in the lead followed by Sanderlin and Huggins both stealing the ball and taking it back for two. The Lady Rockets would never look back, taking the victory, 48-41 over the Brandeis Broncos to move on.

The Lady Rockets improve to 30-8 on the season and move on to the Regional Quarterfinals, in a highly-anticipated matchup against O’Connor Panthers (24-9), and sophomore Carleigh Wenzel who scored 37 points last Friday, tomorrow night at the UTSA Convocation Center on the UTSA campus at 7:00.