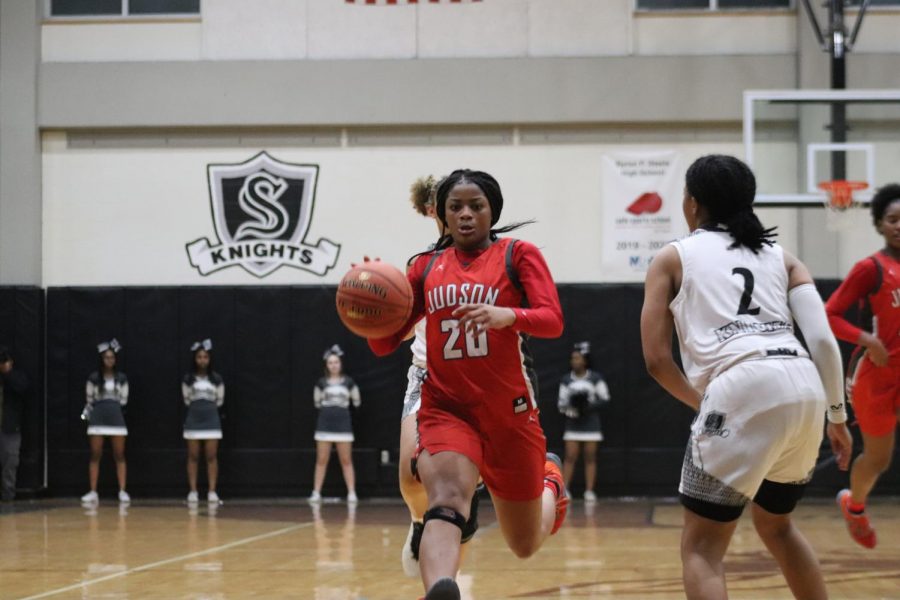 Junior Kierra Sanderlin pushing the pace on the court during the game against the Steele Knights. The Rockets beat the Knights 68-44.

In the second quarter, the Lady Rockets took a 14-20 lead and scored with the help of an impressive defensive effort. Then, both the Knights and Lady Rockets went back and forth and the game was tied at 26 before Sanderlin sank two free throws to send the Rockets into halftime in the lead, 26-28. Mabry, Sanderlin, and Huggins headlined the scoring all throughout the first half.

In the third quarter, after Steele made it a one-point game to start, the Lady Rockets defense was the difference-maker. Huggins sank a three, then stole the ball and drove in for a layup to make it 28-34. The Lady Rockets then increased their lead to 11 points to end the third, 35-46 after senior Jonmecia Baskin went in for a layup.

In the fourth quarter, Mabry highlighted the scoring for the Rockets. Mabry went in for consecutive layups and had multiple rebounds and the Lady Rockets found themselves up 44-54. But Mabry didn’t stop there and continued to dominate inside the paint and the Lady Rockets pulled away for a 44-68 victory over the Knights. Mabry had 27 points on the night followed by Huggins’ and Sanderlin’s 17 points.