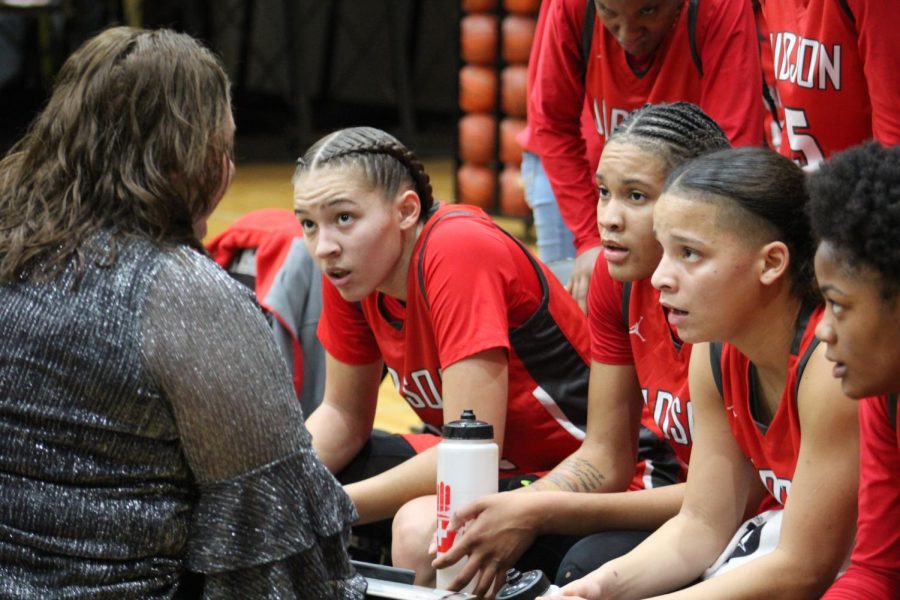 Coach Corrales instructs her starting five during a timeout. Rockets went on to win 63-46.

On Tuesday night, the Lady Rockets (21-4) competed in an anticipated matchup against the Steele Knights (13-6).

In the first quarter, senior Ashley Bowen of Steele got involved early with offensive points off the glass. The Rockets keep pace against the Knights with early points from senior Tiffany Mcgarity and sophomore Kierra Sanderlin. Steals and defensive pressure by the Rockets slowed the Knights offensive tempo. However, the Knights were more locked in, clicking offensively and developing a slight lead on the Rockets. Mcgarity closed the gap with a three-pointer and the quarter ended Knights leading 17-16.

In the second quarter, the Rockets were determined to control the pace of the game offensively, with senior Corina Carter starting the quarter with a quick three-pointer. Mcgarity continued to drive and go 2-2 on free throw attempts and Sanderlin competed against the height differentials on Steele with tough layups. This led to a seven-point lead that Judson capitalized on. After the timeout, senior Kyra White hit a quick three-pointer, and senior Zayya Brown became active on defense and completed a layup in closing seconds. The Rockets held Steele to 6 points in the second quarter and were now leading, 39-24.

In the third quarter, senior Kyra White continued to be active on defense with blocks and steals against Steele. This leads to assists from junior Teanna Huggins to Sanderlin. Junior Aja Holmes and senior Angeline Sanchez of Steele attempted to get their offense flowing, but Carter had other things in mind. She became prolific on offense and ultimately gave Steele no hopes of a comeback. The Rockets ended the quarter furthering their lead, 52-34.

In the fourth quarter, Carter continued to make her presence known with an early call that was converted. Bowen attempted to again get the offensive flowing, but Judson seemingly let the clock run out as Steele began to scramble for points. The starting five continue to display their skills and further the point differential. Despite their efforts, Steele lost their tempo midway through the game and the Rockets won this matchup, 63-46.

The Rockets face off against San Marcos on Friday at home.