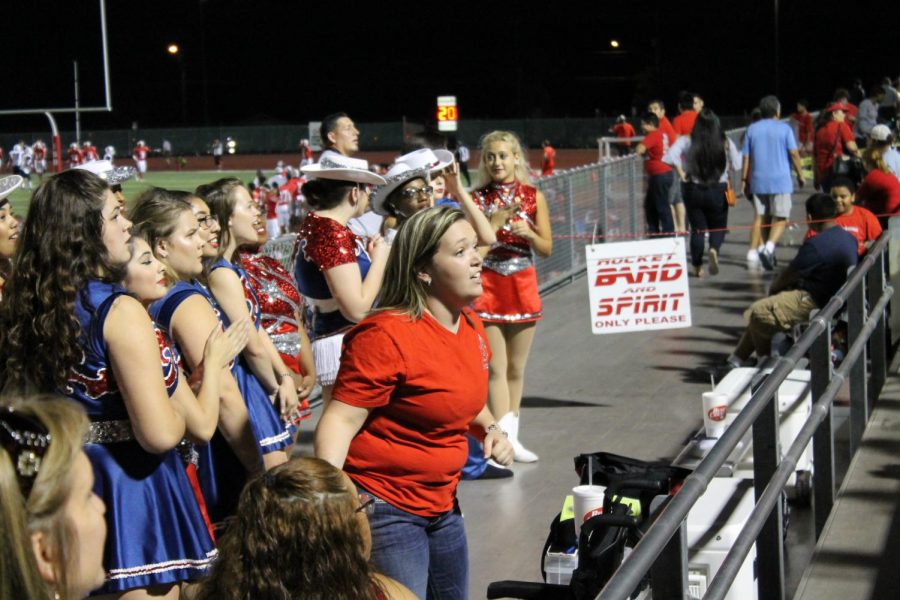 Ms. Lauryn McCarthy coaches her dancers during a football game at D.W. Rutledge Stadium. This is her second year as director of the organization.

Ms. Lauryn McCarthy, a dance instructor, has been nominated for the H-E-B Excellence in Education Award. Through the program, H‑E‑B seeks to pay tribute to those educators who go the extra mile each and every day to serve their students and their communities and who inspire others to do the same.

The nominations are anonymous. Once the teacher finds out they have been nominated, they fill out an application describing the things they do in the classroom and what they would do with the money.

This is the second time McCarthy has been nominated in the two years she has been at Judson.

“I really try to build a great relationship with the students,” McCarthy said. “I wouldn’t like it if someone would be beating around the bush with me.”

Her love from dance and teaching came from a love that her dance teacher gave to her.

“When I was in high school, I had this amazing dance teacher. She was like my second mom. She taught me how it was to be an adult and what it means to be a dancer. She encompassed everything for me. So, I want to be that person for someone else,” McCarthy said. “When she told me I can major in drill team instructing, my mind exploded.”

As one of two dance instructors, she is setting goals for herself and the team as she continues growing as a teacher.

For the program, she wants to focus on the team relationships and the bond that the dancers have with each other.

“Some of these kids have danced with each other for years, but they don’t know each other,” McCarthy said.

If McCarthy wins the award from H-E-B, she will be awarded a grant for herself and the school/program.

“I don’t know what I would do for myself if I won,” McCarthy said. “But, for the team, I would love to bring in choreographers to get the dancers out of their comfort zone.”

According to the website, created in 2002, the H E B Excellence in Education Award is designed to honor outstanding public school professionals and to thank them for their dedication and commitment. McCarthy is in the process of finishing the application. If she wins, she can be granted $5,000 to $25,000.