October is a great time for Breast Cancer advocacy and education 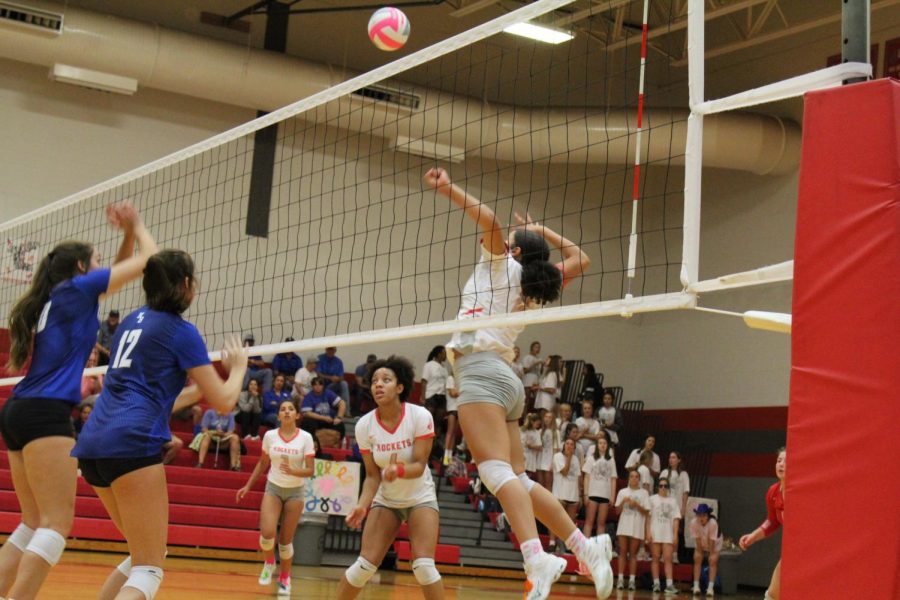 Throughout the month of October, various games and events occur to honor Breast Cancer Awareness Month. During the month it’s important for students and people to honor those who have survived, are fighting, or are indirectly affected by breast cancer in some way.

According to Breast Cancer Consortium, Beginning in 1985, Betty Ford and her daughter led the first Breast Cancer Awareness Week. From there, National Breast Cancer Awareness went year-round, educating and honoring those affected. The fundraising activities and events eventually became centered during the month of October to better focus the efforts in raising money for treatments and research.

“Almost 13% of women born in the United States will develop breast cancer. Breast cancer awareness month is a campaign that aims to educate people about the importance of early screening and testing. As we increase awareness, we are helping prevention, diagnosis, treatment and ultimately finding a cure. In addition, the month-long campaign offers information and support to those affected by breast cancer,” district director of women’s athletics Ryanne DuPree said.

Breast Cancer Awareness is honored in different ways throughout the district. The main highlight of the month is the Dig For A Cure game hosted by JISD Athletics. This year, the game will be held at Wagner as they face off against Veteran’s Memorial on October 25. The game holds a ceremony in remembrance to those who have lost their fight and survivors of the disease.

“This is our 9th annual Dig For a Cure Game. Several JISD coaches pitched the idea of having a game and t-shirt sale to bring awareness and help raise money for research and treatment of breast cancer. Since 2010, JISD has donated over $20,000 to Susan G. Komen and the Texas WINGS organization,” DuPree said.

Within the district, Coach Renee Cabrera at Kitty Hawk Middle School and Ms. Yolanda Vega at Salina’s Elementary School, are among the many survivors who are honored at the game for surviving breast cancer. Each of them offer different experiences and advice for those who are currently fighting.

“Breast Cancer has impacted my life by making sure that I get all my yearly exams.  It is a disease that attacks anyone at any age. I also want to educate others on the importance of getting your yearly exams,” Cabrera said.

As for Vega, she looks to both educate and connect with others going through the treatment of breast cancer.

“Having had breast cancer, it has impacted my life by allowing me to advocate for better treatments for the disease and allow me to witness others who are going through what I did when diagnosed,” Vega said.

Due to there own experiences, they also have advice for those who are currently battling.

“Don’t panic. Hold on to your faith! It isn’t the end of the world. Treatments have gotten better and there is definitely life after cancer. Talk to others because you are not alone,” Vega said.

For Cabrera, it’s a steadfast direction for combating the diagnosis.

“Stay positive throughout your battle and never stop fighting this disease,” Cabrera said.

Hearing the stories from these women and so many others who may be affected in the district, city, and nationwide by breast cancer, shows the importance of the month itself.

“Unfortunately, breast cancer has become all too common in many of our lives. From fellow coaches, close friends to family members, breast cancer has personally impacted me. I’ve seen so many strong women fight and beat this horrible disease. Their strength and resilience encourages me to remain steadfast in our mission to find a cure to ensure no one in our community has to experience or witness another loved one endure the pain accompanied with such a battle,” Dupree said.