The Fuel Online • May 9, 2022 • https://thefuelonline.com/owning-the-beauty-of-my-natural-hair/

Owning the beauty of my natural hair 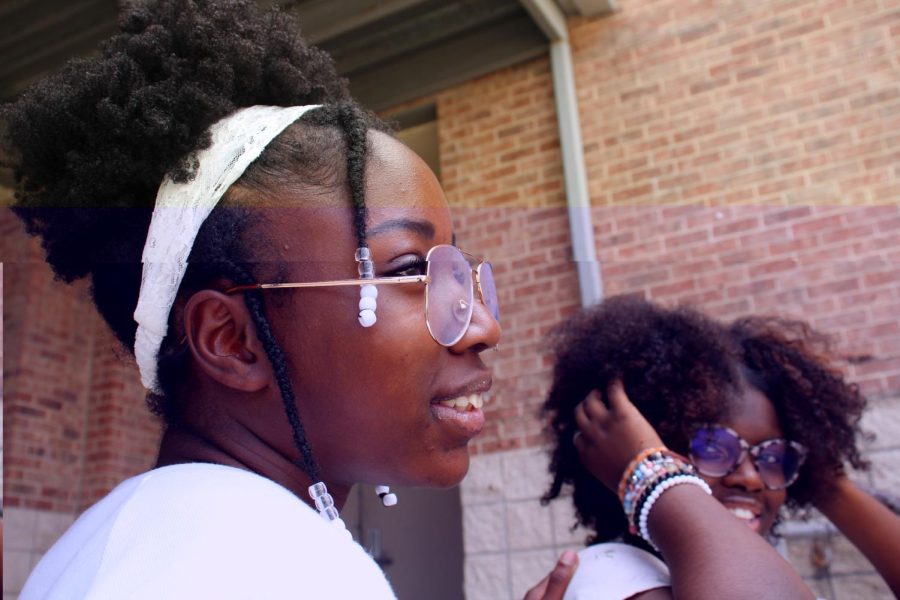 Freshmen Destiny Williams and Taylor Brown pose for a picture outside of the AG Barn to highlight the beauty of their natural hair.

Hair, defined as strand-like threads that spur from the scalp. We use our hair as a way to express ourselves in a cosmetic form of art. For many, our hair is the way other’s identify us.

There is a wide range of different hair textures and densities, each one having a particular upkeep and maintenance. I’ve seen that often, when people are ignorant to the distinctive characteristics and diversities of hair types, they sometimes attach a negative narrative to the hair. The primary victims to this ignorant viewpoint is the natural hair community.

Because of society’s history surrounding the subject, natural hair has become a sensitive topic for most of us in the African-American community. It’s caused many of us to bear internal conflicts and struggle to fully embrace our natural, afro-textured hair.

Volleyball and Basketball Coach Breana Brock has dealt firsthand with the internal conflicts that come with being an African American woman struggling to fully embrace her natural hair.

“When I was younger, I struggled a bit with seeing the full beauty of my hair. I think that social media and tv definitely played a part in that, because we were conditioned to think there was something wrong with natural hair,” Brock said. “There was an association with natural hair being referred to as unkempt, versus it being straight, or gelled down. It wasn’t until I got older, that natural hair became a conversation and more of a thing for us to embrace,” she said.

Dating back to the 19th century, society has always been more accepting of silky, straight hair. This naturally caused many members of the black community to venture out and seek ways to reach this beauty standard. Because of this, hair care producers such as Madam C.J Walker and Annie Malone created hair techniques to help the black community safely achieve the straight look. Examples include the hot comb and perming formulas.

However, afro-textured hair should be kept in its natural state. Styling processes such as straightening and perming can cause damage and increase breakage. Senior Janaza Pelzer at one point also felt the pressure at a young age to straighten her hair.

“When I was younger, I was in a predominantly white environment. My hair wasn’t normalized, and I always wanted it straight,” Pelzer said. “As a result, my hair caught heat damage and broke off a lot. This didn’t make me feel pretty, and I realized that I ruined my natural hair.”

I, like many in my community, have had moment’s where I’ve straightened or altered my hair from its natural state to appease the general opinion. While this has much to do with looking appealing, it is also a type of survival tactic.

To avoid humiliation, and many times to move up in social status, many black Americans will intentionally manipulate their hair to adapt to the environment and camouflage with the majority. In many cases, we’ve seen the topic of natural hair being the butt of the joke or the reason for judgment.

Blending in makes us, in some way, feel a part of the larger majority.

Bottom line is, we feel the stares. We hear the comments. And many times we succumb to that societal pressure, and change our hair. However, our hair styles are an important part of our culture, and it’s vital for the rest of society to understand that.

Because of our hair’s versatility, we’re able to alter it in many different ways. Styles such as braids, locs, and twists are protective styles that require little manipulation and are easier ways for us to maintain our natural hair while promoting hair growth.

However, many times, when we wear our natural hair, that’s when the negative narratives come out. When phrases such as “unprofessional”, “untamed”, or “nappy” are used when referring to natural hair, it highlights the misunderstanding and unfamiliarity with our afro-textured hair.

Growing up, I was raised in a predominantly hispanic and white area. From kindergarten to fifth grade, I was the only black child with afro-textured hair. I barely saw anyone with my type of hair.

I’d receive negative comments regarding my hair because others didn’t understand why my hair was so “nappy” or “in a puff”. For a while I deeply struggled to embrace my hair without constantly feeling self conscious. On many occasions, I would get treated differently depending on what hair style I wore. However, in spite of it all, I had to learn that regardless of what people said or thought, my hair doesn’t define my beauty.

Others in the black community such as senior Taniya Jackson have felt these hardships as well.

“Due to  what others would say about my natural hair, it affected me tremendously. I tried to fit in with the others, instead of loving me for who I am,” Jackson said.

For others who may be experiencing what she went through, Jackson has advice.

“For younger kids, negative comments on their hair lowers their confidence and breaks character because they now want to be something other than themselves,” Jackson said. “To those who felt like I did, I want you to know that beauty is more than the superficial things. It’s bigger than just your hair.”

Our hair isn’t nappy, nor is it “untamed”.  Our hair is coarse, having more density than other hair types. There are many different hair types, scaling from 1A to 4C. Recognizing that fact will help society truly understand the different forms hair comes in. This will further prevent insensitive or ignorant comments about our hair.

To be clear, the word “nappy” has always had a negative connotation. It’s often confused with the word tangled. While both generally mean the similar concepts, “nappy” has been used to deliberately put down people with afro-textured hair. Negative phrases like this have aided the harmful narrative that natural hair is unkempt and unprofessional. In reality, it’s just Black hair.

As a community, we’ve progressed with embracing our natural hair texture. Since the natural hair movement during the Civil Rights era, we’ve seen many black icons such as Angela Davis, Bobby Seale and Diana Ross embrace their natural hair and wear afros. This has contributed to the popularization and normalization of natural hair.

By the beginning of the 21st century we began seeing more afro textured hair models, influencers and tv characters on our screens. Things like that have helped the Black community feel a sense of acceptance.

To add to societal progression, the issue was brought into national spotlight after Congress member Bonnie Watson Coleman of New Jersey sponsored legislation calling for the acceptance of natural hair in the professional environment. The C.R.O.W.N Act (Creating a Respectful and Open World for Natural Hair Act of 2022) Passed the House of Representatives in March 2022. With hope, the act will one day become law and discrimination of hair in the professional setting will be no more.

For all of the progression, however, it’s all for nothing if young girls don’t accept the beauty within themselves. I wish that when I was younger I hadn’t wasted so much time worrying about what I didn’t have, and had been able to appreciate what I do have.

I don’t have straight, silky hair, and that’s okay. My hair is curly and perfect just the way it is. The strands that spur from my hair aren’t the root of my beauty.