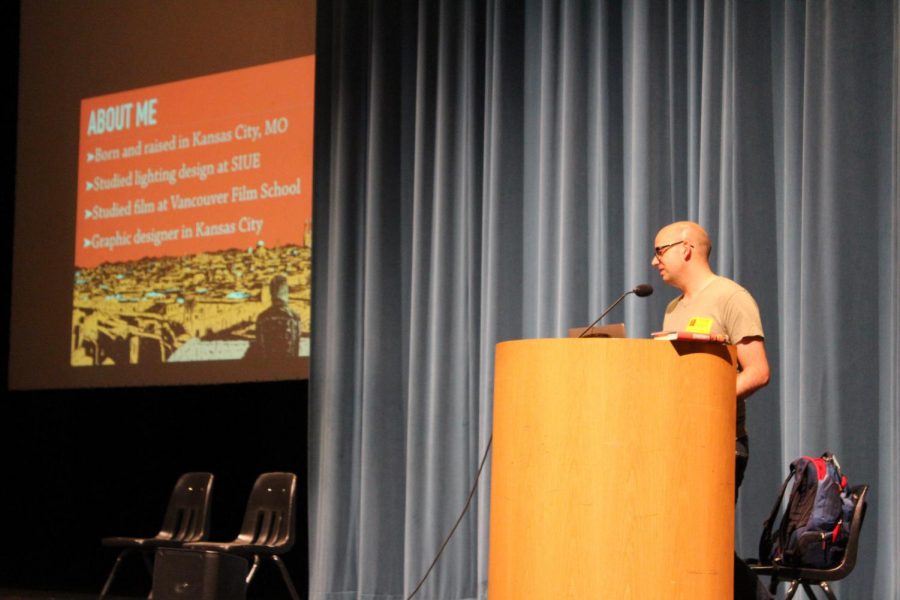 Author Adib Khorram speaks in front of a group of students in the Performing Arts Center. He spoke about his life and inspiration behind his first published novel “Darius The Great Is Not Okay.”

On September 19, 2019, author Adib Khorram visited the campus to speak to students from both Judson and Veterans Memorial High School about his life and inspiration behind his first published novel “Darius The Great Is Not Okay.”

Khorram was born and raised in Kansas City, Missouri to an Irani immigrant father. Although he had been writing since his first story – a “Lord of the Rings” fan fiction from sixth grade – he didn’t find his passion for writing professionally right away. Khorram attended Vancouver Film School and worked as a graphic designer before becoming an author.

Once writing really took off for him, Khorram became passionate about his work and that passion took the form of inspiration as he spoke to the crowd.

“For me, writing is really about fun, expression, and young individuals who seek to find themselves in books,” Khorram said.

Khorram then took a moment to connect with the young authors in the crowd by asking for volunteers to share their experiences as young writers.

“It was interesting to see that there was a lot of other people that are doing the [writing] thing too,” junior Skyla Mendenhall said. “It was really cool to listen to somebody who is actually an author just because that’s always been a dream of mine so seeing someone live that is pretty awesome.”

He then opened the floor to the audience for them to share their own stories and personal struggles. The room became a safe space for everyone in it to feel accepted and inspired.

“My favorite part was when people were telling their stories and [sharing] what they’ve gone through throughout their life because I’ve been through a lot of difficult stuff that I don’t like to share,” junior Crystalia Hendrix said. “Hearing everybody’s stories made me realize that I’m not the only one [struggling].”

“Darius the Great Is Not Okay” clearly takes inspiration from Khorram’s personal life, as he and Darius are both gay, Irani men with similar struggles. This representation held a lot of importance to Khorram.

“I wrote this book because it’s the book I needed as a teenager,” Khorram said.

Khorram stressed the importance of representation in literature, however also made a point about uplifting unheard voices rather than using their struggles for profit.

“If it is a group that I identify with or that I am at least very closely adjacent to then I do want to write the story myself, that’s kind of where Darius came out of. [However], I think there is danger in [telling] someone else’s story just because it isn’t out there because that doesn’t mean someone isn’t trying to tell it. There are a lot of systemic barriers in place: racism, homophobia, transphobia, and even just economic advantages,” Khorram said. “Publishing is overwhelmingly upper middle-class white ladies, so they don’t always realize that economically disadvantaged people have stories to tell too. So sometimes I need to be seeking out those voices and uplifting them myself.”

Khorram was asked if he would consider teaching writing to young authors in some way but surprisingly, he said no. However, this response seemed to resonate with the authors in the audience.

“When he said he wasn’t in a mindset to teach because it was just something [he] had to figure out I thought that was pretty cool because that’s kind of how I am, I have to figure [writing] out on my own,” Mendenhall said.

Khorram revealed that he is in the process of writing another novel and shared that more details will be coming out in the near future.