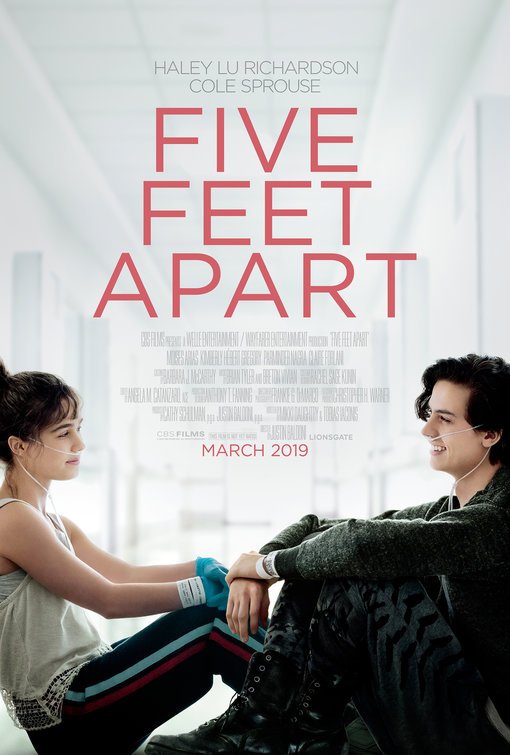 On Wednesday, March 13, “Five Feet Apart” had a sneak peek of the film before it was released on March 15. The movie is based on the novel of the same name, written by Tobias Laconis and Mikki Daughtry.

The movie starts with one of the main characters, Stella, played by Haley Lu Richardson, talking with her friends. But its once they leave that the audience gets to see Stella in her life at the hospital, as a patient with cystic fibrosis.

Stella has dealt with her disease for most of her life. She has developed ways that help her feel in control of it. But one thing she can’t control is her social environment in the hospital. Will, played by Cole Sprouse, is one of the other patients at the hospital, with a disease that is very rare and very dangerous.

The two strike a deal. And while completing their regimens together, they become unlikely friends. However, their friendship grows into more than that and causes them to take risks.

A rule with cystic fibrosis patients is that they aren’t allowed to touch. If they do, they risk the chance of infecting themselves with each other’s diseases. They must always stay six feet apart.

Stella has had a rough life with her sickness and her family. And when Will becomes pessimistic of his treatment, Stella decides to take something back in her life.

From then on, she and her friends are always five feet apart, hence the name of the film.

But after the loss of one of her best friends, Stella decides to leave the hospital, in search for an adventure. She and Will try to walk to the lights in the distance of the hospital stopping along the way at a lake.

As the audience holds its breath for these two characters and their choices, the scene gives both a sense of hope and fear into what their futures will be.

The end of the movie produces a tear-jerking and heartbreaking moment, but one filled with love and promise, something that the audience looks must look forward to.

Five Feet Apart was executed beautifully and tragically, telling the story of two young star-crossed lovers. If you’re searching for romance and hope, it’s one to watch.