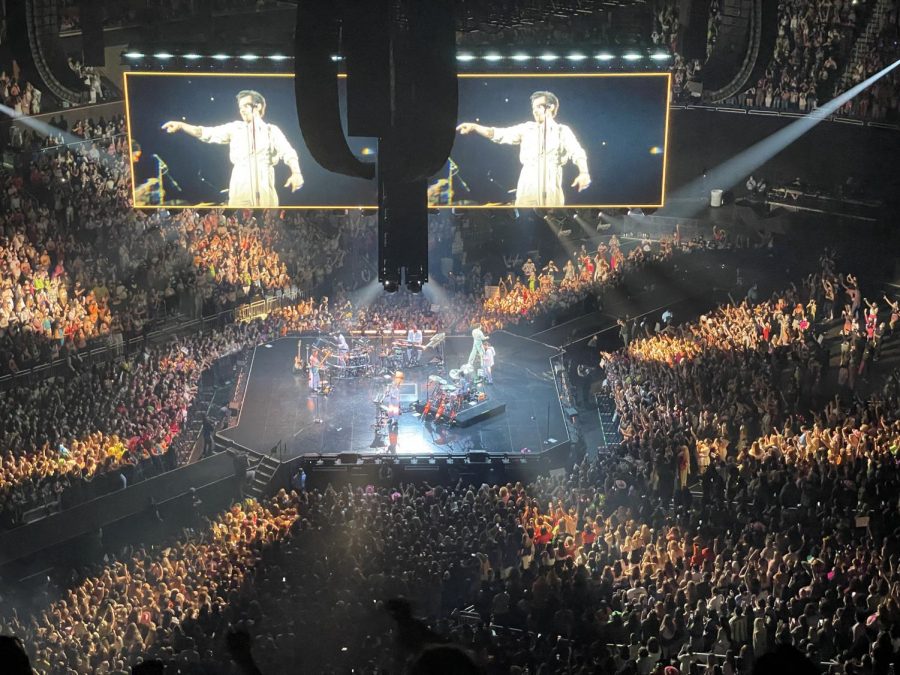 Nearly 20,000 people pack the Amway Center in Orlando, Florida to see Harry Styles in concert. This was part of his "Love On" Tour.

British singer Harry Styles, once known to be a part of the British boy band One Direction, announced that he was going on his first tour as a solo artist.

Harry’s songs became a huge hit, which encouraged him to go on tour. Originally, the Harry Styles “Love on Tour” world tour was supposed to happen in 2020 but due to the global pandemic, it got pushed back.

On July 14, Harry announced that the “Love on Tour” tour was finally going to happen, but you had to be vaccinated or show a negative covid test 48 hours prior to the show. His San Antonio date was set for Thursday, September 9, at the AT&T center. Unfortunately, I wasn’t able to make that show but I was able to experience Love on Tour in Orlando, Florida at the Amway Center.

The concert started at 8 with Jenny Lewis as the opening act. She performed her music, put on a great show and got the crowd ready for Harry Styles. Jenny Lewis ended at around 8:30. With 30 minutes left until Harry came out, the crowd began to sing “Hey, There Delilah,” Hamilton songs and also created a “wave” throughout the crowd.

With the lights turned off, the crowd was screaming and ready to see Harry’s performance. Harry came out and his opening song was “Golden,” which set such an amazing energy and tone for the rest of the night. Everyone was full of energy and dancing. Seeing him perform “Golden” live was an amazing experience and the lights in the stadium were spectacular. In between songs, he would talk to the crowd and interact with so many people.

Prior to “Adore You,” he made a comment saying, “I want you to have as much fun as you possibly can. If you want to sing, if you want to dance, please feel free to do whatever it is you want to do in this room tonight. And please, feel free to be whoever it is you have always wanted to be in this room tonight. I challenge you to have as much fun as I’m gonna have tonight.” This got the whole crowd dancing with each other and just enjoying every single moment of the song.

When Harry began singing “Falling,” the crowd was less energetic because it was a slower song. With this being my favorite song by Harry, seeing this specific performance was amazing and beautiful. The way the crowd all just calmed down, it was just a moment of taking everything in. During this performance, he had a disco ball that lit up the whole room and looked like there were stars everywhere.

The show wasn’t over there.

With “Falling” finishing up, Harry quickly brought the energy back to a high and performed “Sunflower.”

After he performed “Lights Out,” he talked about his first time coming to the United States when he was four, how he went to Disney and how Orlando always holds a special place in his heart.

As the night went on, people were wondering if he would sing a One Direction song, but no one really knew if it was certain. A couple of songs went by and then all of a sudden, “You don’t know you’re beautiful” came on and the crowd went crazy. With this being a song from One Direction, people haven’t heard it live in a very long time. This song had to have been the highlight of the night and was just perfect. No one really thought he would sing a One Direction song.

The night went and he sang his hit song “Fine Line.” He was thanking the crowd for coming and sending love to everyone and just taking everything in. Just when the show was about to end, he ended the show off by singing “Kiwi.” It was a great way to end because it wasn’t a sad song. It was a very energetic, happy song and was just the best song to end off the night.

Overall, being able to see Harry Styles live was a wonderful experience. I am so grateful for the opportunity that I had and I personally think that his performance live was better than listening to it on my phone.