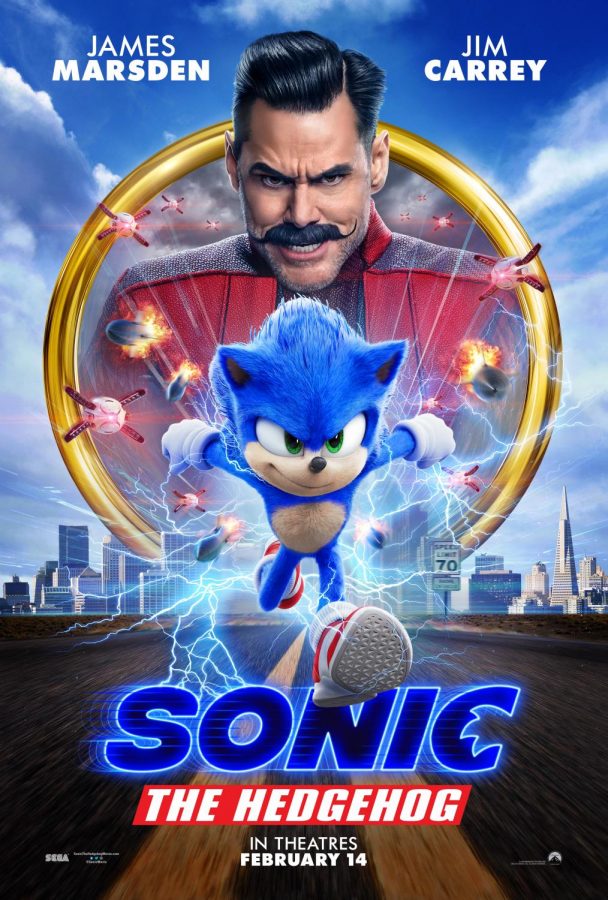 On February 14, 2020, Paramount’s live-action adaptation of Sonic the Hedgehog debuted globally, earning $70 million in the United States and $113 million worldwide over the holiday weekend. This movie took SEGA’s iconic blue blur and introduced him onto the big screen with an outstanding design coupled with quality voice acting provided by the talented Ben Schwartz.

The movie begins as Sonic is chased off of his home planet and forced onto Earth in an attempt to maintain his safety. However, he is quickly discovered after accidentally creating an electromagnetic pulse with his speed, wiping out power across the entire Pacific Northwest. The United States government hires a man named Dr. Robotnik, played by Jim Carrey, to catch Sonic. From there, Sonic and his friends attempt to evade capture as they try to send Sonic to a safer planet.

This action-comedy consisted of many memorable moments and incredible visuals. Though the movie was written for a younger audience, there was something for everyone to enjoy in this movie, including those previously unfamiliar with SEGA’s supersonic hedgehog. Due to the movie following Sonic, who is unfamiliar with Earth, the audience was given an outside look into humanity and American culture through the eyes of a foreign body. It was nothing short of an incredible movie-going experience to watch such a unique and iconic character come to life in a way never before seen.

Sonic the Hedgehog, just as any other movie, was not without its flaws. As mentioned before, the movie was targeted towards younger audiences and the writing definitely reflects this. The movie consisted of vast simplicity, predictable cliches, and, ironically, felt a little fast-paced. From the point of view of someone who is unfamiliar with Sonic the Hedgehog as a franchise, the movie may have felt like any other “get the alien home” type film.

However, from the point of view of a long time Sonic fan, each of these points is vastly overweight by the phenomenal continuity between the movie and the games. References to the Sonic games are everywhere in the movie, making it feel as if the writers were writing from the point of view of a fan. References include “Friends,” by Hyper Potions, the song first introduced to the series with the release of Sonic Mania, playing as Sonic runs through his planet. Other notable references include: the suburban neighborhood being named Green Hill, the nod towards Mushroom Kingdom zone, Robotniks’s nickname “Eggman,” Robnik’s design toward the end of the film, The Echidna tribe, and most notably, the inclusion of Tails in the after credit sequence, teasing perhaps a follow-up film.

From the eyes of someone long familiar with Sonic the Hedgehog, this live-action adaptation was everything one could hope for and despite perhaps a few grievances, the movie lived up to every preconceived expectation, perhaps even superseding them.