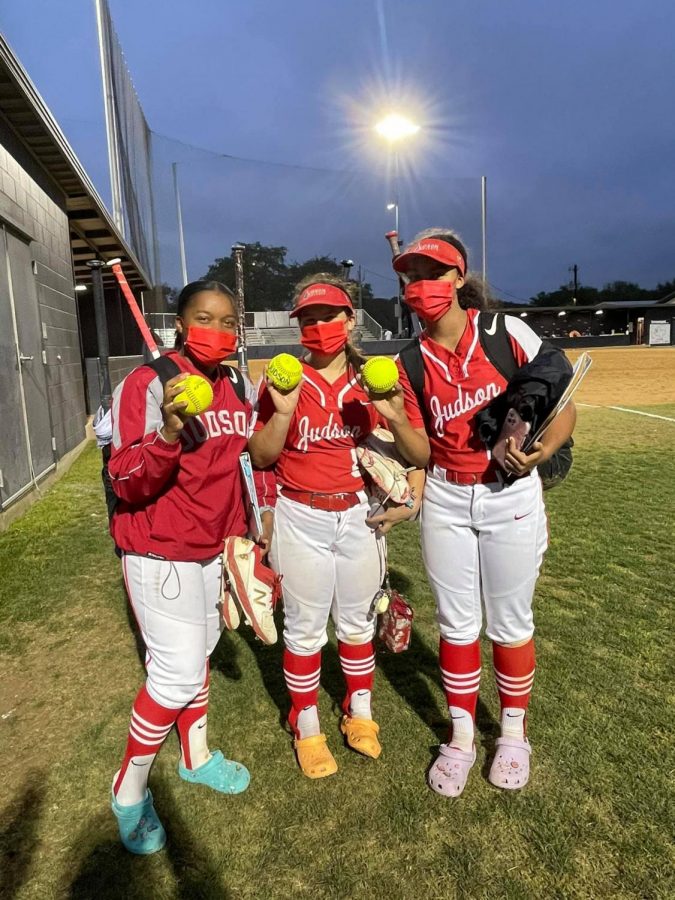 At the end of every game, the tradition is to spotlight Judson Softball's "Homerun Hitters." For this game, they were Queeandra Dunn and Keely Williams!

To begin the game, junior Keely Williams hit a triple on her first at-bat to set up junior Madalynn Thornton to hit a double and send Williams home for the first score of the game putting the Rockets up 1-0. Junior Destiny Rodriguez hit a double to send Thornton home which allowed Junior Emily Ayala to hit a single and move Rodriguez to third.

After sophomore Alyssa Keene subbed in for Ayala at first, Rodriguez ran home for the Rocket’s third score of the game, increasing their lead to 3-0. Sophomore Queeandra Dunn then hit a home run which allowed Keene to run in and increase the score to 5-0 which ended the top of the first inning. To begin the bottom of the first, Ayala struck the first two batters out and then hit the fourth and fifth which filled the bases after the two got walked. The Rockets then tagged a runner to end the inning with the Rockets in a sturdy 5-0 lead.

To begin the top of the second inning, Keely Williams hit a single, stole second, and then third to set up Thornton to also hit a single. With runners on third and first, Rodriguez was able to get Williams to run in and increase the lead to 6-0. After a few more runners got on base, the Rockets got struck out to end the top of the second with them in a handsome 6-0 lead. To begin the bottom of the third, the Rangers had two batters on first and second with two outs when senior Lauryn Ramos threw out the last batter to end the second with the Rockets still in the lead 6-0.

To begin the top of the third, after Ramos and senior Samara Sanchez got called out, Dunn hit a double to set up Pacheco to get walked. With runners on first and second, junior Arianna Alejandro hits a high first to allow Dunn to run in and Pacheco to move to second. With runners on first and second yet again, Williams got walked to load the bases and Thornton hit an amazing grand slam to increase the lead to 11-0 which ended the top of the third. To begin the bottom of the third, the Rockets got all three batters out to end the third inning with the Rockets still in the lead 11-0.

To begin the fifth inning, senior Angelica Pineda hit a clutch single and stole second after the first two batters got struck out. After Pinedas’ single, Willams hit a deep home run to bring in Pineda and push the lead to 13-0. Thornton followed with a single of her own to set up Rodriguez to hit the back wall and allow Thornton to move to third. After the Rocket’s final batter got stuck out, the top of the fifth ended with the Rockets in the lead 15-0. To begin the bottom of the fifth, all Rangers batters got called out and the game was forced to end due to mercy rule as the Judson Rockets defeated the Smithson Valley Rangers 15-0.

The Judson Rockets (23-1) will face off against the Steele Knights at home at 5 p.m.