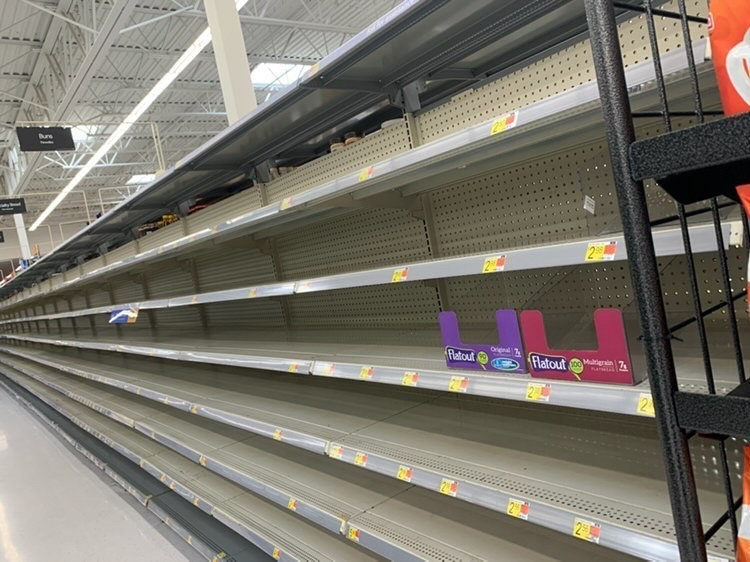 Senior Ronald Waiter takes a picture of an empty grocery store aisle. HEB, a Texas grocery store, was cleared out before and during the snow storm event in Texas. However, they have been praised for their preparedness before, during, and after the storm.

Too much of a good thing can be a bad thing, as many Texans would testify following the recent overstaying welcome of the “Snowvid” snow storm that buried almost the entire state in almost 20 inches of total snow; a state record.

Locally, families all over San Antonio were making snowmen, snow angels, having snowball fights, and even sledding down massive hills of snow. Things seemed to be a winter wonderland; almost like a dream, one of happiness and peace as it allowed everyone to experience something they once thought was impossible…until it became a very real nightmare fueled by panic and a shivering chill.

Temperatures dropped below 11 degrees and Texans all over soon found themselves experiencing power outages and water shut-offs as the storm derailed the extremely unprepared system that was supposed to prevent such things from happening. Panic soon ensued as citizens rushed to gather supplies, food, anything they could get their hands on that could potentially benefit them for survival.

Senior Nic Tatsch, varsity baseball player for the Judson Rockets, and his family prepared by keeping themselves warm and making sure they were able to maintain at least a little comfort during the storm.

“We got gloves, space heaters, a bunch of warm clothes, and a shovel so we could get snow in order to be able to flush out the toilet,” Tatsch said.

Many San Antonians found themselves having to find some way to make up for the water stoppages and their pipes being frozen over due to the cold weather. Whether it was getting snow from the outside or filling the bathtub with as much water as possible before it’s cut off, many citizens were forced to adapt and go out of their comfort zone for survival.

“We had to buy a lot of water bottles. We had to get up early in the morning to beat others because it runs out fast. We also had to get two or three five-gallon jugs so we could wash dishes and make food,” senior Brix Baylon said, “We have to drive all the way to Pat Booker just to refill those, and we had to use the neighboring pool for bathroom purposes. Doing all that was very hard and tiring but most of all, expensive.”

Some families were fortunate enough to not have any water or power get turned off but it was their responsibility to help their family members who didn’t get so lucky. Although they were able to provide a place to stay with the luxury of having power and water, Sophomore Joselinn Perez said the overcrowding and the loud noises multiple people under one roof created was the hardest part of it all.

“We had plenty of food and water for everyone who came to stay at our house, the only problem we faced was the crowded feeling as I had to share my room with my cousins so they could have a place to sleep,” Perez stated. “There were about 15 people at my house including multiple crying babies that made an already noisy house even noisier. In order to pass the time we watched movies and played games like Lotería and Caldo de res.”

What seemed to be like a gift from the heavens turned into a living nightmare for most Texans as they were forced to overstep their boundaries and get out of their concert zone to benefit their survival.