The Heart of a Champion

After being counted out earlier in the season, the Lady Rockets are heading to the state tournament for the fourth consecutive year. 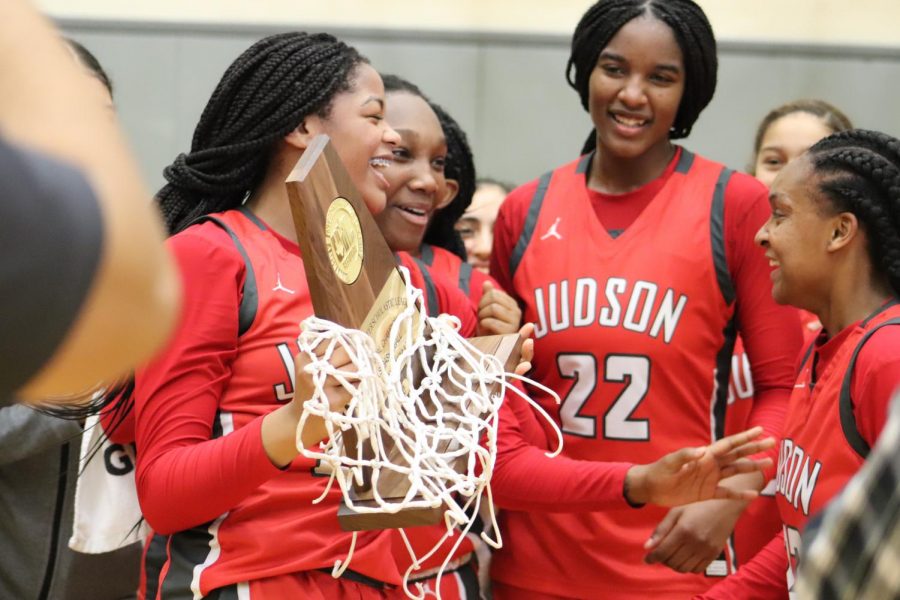 The girls celebrate their regional championship after beating Westlake, 50-47. This is Judson's fourth consecutive appearance at the state tournament.

They weren’t supposed to make it this far.

No one thought they would make it this far.

The Judson Lady Rockets (32-8) made it to the regional tournament for the fourth consecutive season. In the first game, the Lady Rockets blasted the Laredo United Longhorns 69-49 to move on to the Region 4 Final the following day against the Austin Westlake Chaparrals (32-6).

But the fact that they made it to the regional tournament after losing a massive senior class from last year’s state championship team, amazed the San Antonio area and even the state. After starting the season 6-6, the Lady Rockets had been taken off of many people’s radar. But the Lady Rockets would turn things around and go 22-2 and win a fifth consecutive district championship.

Even with the success in the latter half of the season, they still entered Saturday’s Regional Final match with Westlake as underdogs. For many, the Chaparrals would just be too experienced and too much for the young Lady Rockets team. Another thing that would be a factor was that the Lady Rockets beat Westlake in last year’s regional quarterfinal 43-41 after a buzzer-beating layup by Elena Blanding. People felt like the Chaparrals had some unfinished business and that the revenge factor would come into play.

Senior Teanna Huggins and junior Kierra Sanderlin are the only returners from last years’ team and would be huge factors late in the game.

As the game started, the Rockets and Chaparrals went back and forth. However, after struggling against the tough defense brought by the Lady Rockets, the Chaparrals went small ball on offense. All throughout the first half, it was extremely competitive but it was evident that Westlake’s talent and experience were taking over the game as the Chaparrals went into halftime with a 22-26 lead.

Just like throughout the playoffs, the Lady Rockets struggled in the third quarter. They found themselves down ten points entering the fourth, but that is where Sanderlin’s and Huggins’ experience and leadership came in. After the Chaparrals made it a ten-point game once again at 43-33, head coach Triva Corrales called a timeout as things started to look bleak.

The energy from the crowd was the lowest it had been the entire game. Corrales sat down with the girls, which included a gassed Kierra Sanderlin, and asked them if they were done. The girls responded with a no, and Corrales immediately began talking strategy with only five minutes remaining in the game.

The timeout marked a shift in the momentum of the game. From there, Chaparrals went to a stall. Even though the Lady Rockets lack of experience was shown early on, the fight in them never died out. Every chance Sanderlin got, she took the ball inside the paint. Everyone from sophomore Amira Mabry to seniors Jonmecia Baskin, Chiresha King, and Teanna Huggins made sure to give Sanderlin the ball as she was hot. She was red hot from inside with the assistance of Huggins and managed to score the final 17 points to bring the Lady Rockets back into the game and win 50-47.

The energy inside Littleton Gymnasium was immense as the Lady Rockets comeback was complete. Sanderlin, who was a huge impact player from last year, managed to rally the team back.

The Lady Rockets are back at the State Tournament for the fourth consecutive season with a team that everyone doubted. It truly shows that Sanderlin, Huggins, and the rest of the team truly has the heart of a champion.

Everyone owes them an apology.