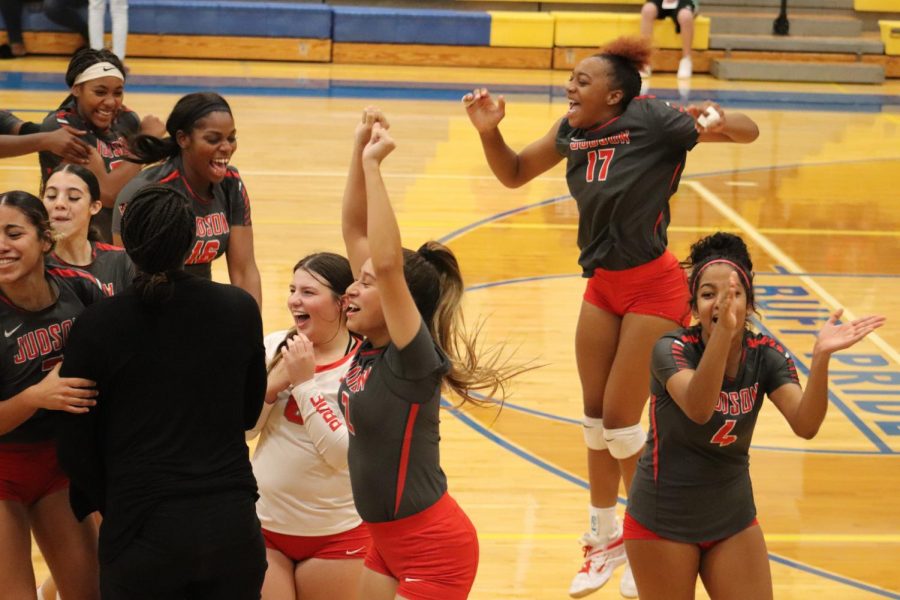 The volleyball team celebrates their win against Clemens.

On Tuesday, September 14, 2021, the Judson Rockets volleyball team faced off against the Clemens Buffaloes in a district game.

After losing the first set, the Rockets came back into the game, scoring the first three points of the second set. With consecutive kills from Roper, the Rockets were able to maintain their lead for most of the set. However, the Buffaloes took a time out and answered back, tying with the Rockets 15-15. The Buffs scored consecutive points, taking the lead and making the score 18-15. The Rockets took a timeout and put in a key player – senior Alexis Walker, who was coming back from missing several games due to an injury. Immediately, the energy on the court changed with the Rockets catching up to the Buffs, which tied the set 21-21. The Rockets took the win after Walker got the winning kill, making the score 25-22.

The Rockets continued the third set with the same momentum and started the set in the lead. However, the Buffaloes answered back quickly, scoring with consecutive blocks against the Rockets and tied the game 9-9. The Rockets didn’t lose their momentum though, with several blocks from senior Jada Leal and Walker. After a phenomenal kill from Roper, there is an obvious and sudden confidence boost on the court. The Rockets played beautifully and coherently as they snuck into the lead with major scoring plays from the whole team. The Buffs tried to catch up but seemingly could not get over the blocks from Walker and Roper. After an amazing set from both the players and the coaches, the Rockets won the third set 25-21.

The Buffaloes, hungry for a win, came into the fourth set stronger than ever as they started off with a five-point lead. The Rockets struggled to get back the power they had gained throughout the game and fell behind. With few scoring plays and the Buffs staying strong on defense, the Buffaloes came out ahead in this set 25-19, which led to having to have a fifth and final set.

The Rockets came back stronger than ever with game-changing saves from seniors Patience Whittaker and Abcde Sutton, and Washington. After much back and forth action, the Buffaloes caught up to the Rockets after a timeout, making the score 11-11. With major kills from Roper, Leal, and Walker, the Lady’s stayed neck and neck until the end. Ultimately, the Rockets took the very unexpected win 17-19 after playing great overall from all ends of the team and coaching staff.

This is the first time the Rockets have beat the Buffaloes since 2013.

“I am just happy the girls got to have this win. This is a perfect example of the hard work they have put in and shows more than anything that they are learning and improving,” volleyball head coach Andrew Fields said.

The Lady Rockets Volleyball team will face off against South San at home this upcoming Friday, September 17, 2021.